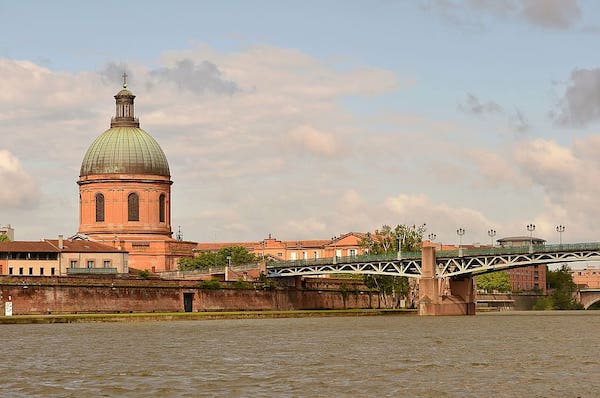 The paths along the Garonne in Toulouse make for a classic European river run. The Garonne bisects the city, with the historic old town on the east bank and the hipper St – Cyprien on the west bank. There are a few different options for tackling the series of paved & unpaved paths that run along the river. A good place to start is the Prairie Des Filtres or Pont Neuf. (Pont=Bridge)

East Bank, Heading North: You can run for 10+ km one-way. The path is more developed for the first 5 km, then is more rugged and pastoral past the Blagnac Bridge (D1). We recommend running the first 2 km on the WEST bank, starting at Prairie Des Filtres park, past the Pont Neuf, and crossing to the east bank at Pont des Catalans. It’s 3.4 km to the A620 and 5 km to the A621 (Pont de Garonne, where you can cross). Past the Blagnac Bridge (5.3 km), you can continue for 5+ km on a series of gravel paths, occasionally a bit inland from the river. You can also cross the Blagnac to run further north on the west side of the river.

West Bank Option. This is an option to run on the west bank of the river, north of the Blagnac Bridge, for up to 6 km. The trails are combination of wooded and open, passing through the lovely Ramiers Park, and eventually reaching a state park, Base de sports et loisirs des Quinze sols (“base of sports and recreation”!). There are a couple of road sections and the paths are not all right along the river.

Option to Head South. It’s also possible to run on river paths south of central Toulouse, for up to 5 km. From Pont Saint-Michel, stay on the west bank, heading south along a riverside gravel path. Past the Pond de Croix de Pierre (1 km), the path turns a bit inland, with a brief on-road section, and continues into a large medical complex. The terrain here is open and away from the river.