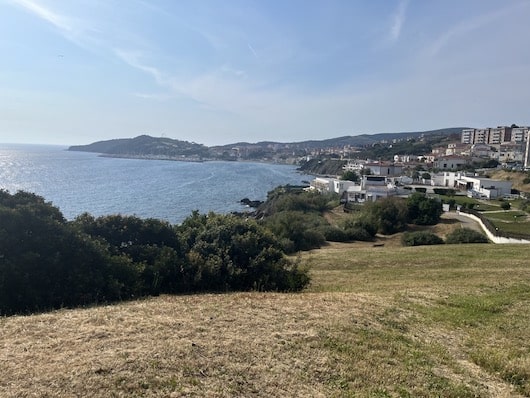 Toward the southern end of the Tuscan Coast, Populonia is known for its Etruscan remains, while Piombino, which sits on the border between the Ligurian Sea and the Tyrrhenian Sea, is a departure for ferries to Elba and elsewhere. There are some excellent running options in the area.

Archaeological Park (Populonia). This large archaeological park is a major visitor destination, for its huge collection of Etruscan remains. One can run on the extensive paths through the park. MAP OF PARK. Note: Fee required, set opening times.  MAP

Promontory Trails: The extensive network of trails along the promontory between Populonia and Piombino is the best choice for running in this area. These well-marked trails are generally wide and make for an easy trail run, with some ups and downs. Our favorite is Trail 302, which is the ancient Via Dei Cavalleggeri road, now a walking trail.  It’s a 10 km out and back atop the cliff between the two towns, affording great views of the sea. Route 300 is another good option, interior and more wooded. See this trail map and description of the route.  Note these trails can be accessed from either Piombino or Populonia. Well waymarked. TRAIL MAP

Piombino Waterfront. One can put a decent 5-7 km run in Piombino, mainly following the water and passing several of the city’s most important sites. It’s not a seamless coastal path, but it’s quite easy to follow. A good place to start is a the Stadium, which has a perimeter path and running track. Then head down to the water, using V. Guiseppe Pietri, and follow the waterfront roads/paths, popping down to the lighthouse (Faro), then along the marina, and then above the water to the Cittadella (fort), along the Leonardo Walls, to the Archeological Museum. There, continue along the main road, which has a red-painted cycle path, to a panorama and on some short trails into the Parco di “Viale Amendola“, and down to the beach.  Our mapped route is 3.6 km one-way.  ROUTE MAP

A 5 km around the green parks atop the walls surrounding the city of Lucca. This... more...

Scenic, airy run on a paved tree lined path along the Arno riverfront in Pisa. more...