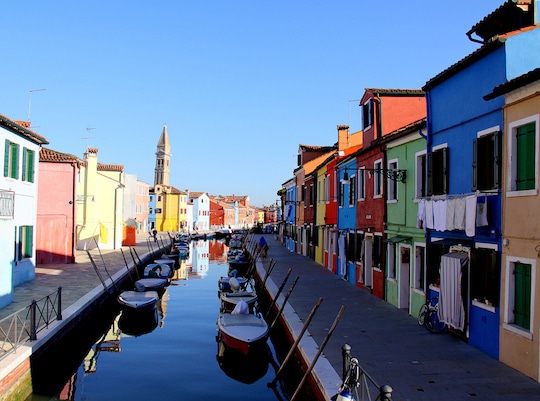 Located at the far northern end of the Venetian Lagoon and a 40-minute ferry ride from Venice, the island of Burano is known for its brightly colored houses, artists, and lace work. We’ve put together a ‘runseeing’ tour of the main sites of Burano, with a jaunt over to the neighboring island of Mazzorbo. Burano is especially nice when not crowded, so try to plan your run early or late.

Starting at the Vaporetto terminal, run south along Viale Marcello, towards the canal, and then turn LEFT at the Fondamenta S. Mauro. After a brief run along the canal, head south on Via Baldassarre Galuppi, a wide pedestrian street, to the end of the island (0.5 km point), and then run back north along the canal on Fondamenta del Pizzo. You’ll see the Lace Museum and the S Martino Vescovo church.

Continue over the Love Viewing Bridge, onto Corte Comare, to the northern end of Burano and the bridge over to Mazzorbo. Enjoy a 2 km loop of the outer paths around the island, with great water views, returning back over the bridge and to the ferry terminal.

A good add-on would be to run in the mainly residential western side of Burano, but the streets are small and there are many dead-ends, so best to just do your own route.