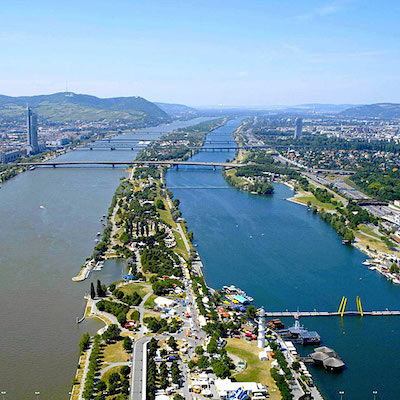 There are three primary waterside running options in Vienna: Along the river, on Danube Island, and along the Donaukanal. The Donauinsel (Danube Island) is a long, narrow island in central Vienna, Austria, lying between the Danube river and the parallel excavated channel Neue Donau (“New Danube”). The island is 21 km (13 miles) in length, but is only 70–120m wide. The island is a popular recreational area for  rollerblading, cycling and swimming, and canoeing. There are also lots of bars, restaurants, and nightclubs. It is very accessible from multiple subway lines – U2, U1, U6.

The island is a haven for running, with paved paths from tip to tip and distance markers. The paths on the end of the islands are a bit more remote, but are particularly pretty, such as the 9 km long section (km 12  to km 21] that runs from the Reichsbrücke (U1 Donauinsel station) toward the barrier dam at Langenzersdorf. Overall, the trail is quite open. There are frequent restrooms and water stops along the centrally located sections. From the southern tip, key distances, in km. The most central sections are between the 8 and 16 km marks (south to north).
4.3    Donaukraftwe Add-Ons/Variety: Paths along the Danube River on east or west sides, with several bridges crossing to/from the Island.