No Thanks
Washington, D.C. Suburbs 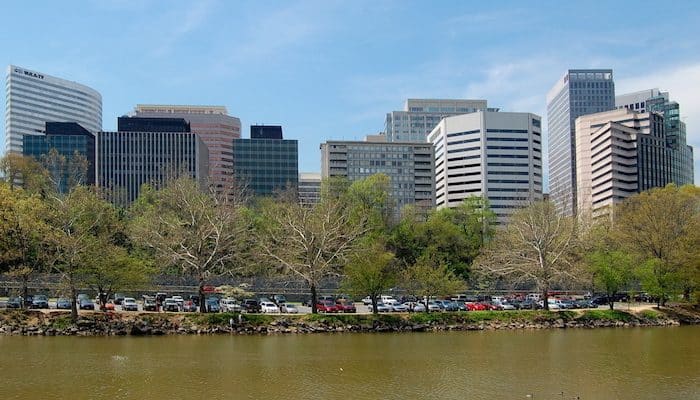 This is a guide to some of the best places to run in the Virginia suburbs just west of the District of Columbia, predominantly in Arlington and Fairfax counties, including the communities of Arlington, Reston, Alexandria, Tyson’s Corner, and Fairfax. The area is sprawling and prosperous, home to US intelligence agency headquarters, the Pentagon, and numerous Fortune 500 companies. The riverfront, series of streams, and rolling Piedmont hills offer some great running opportunities. There are some wonderful routes in the immediate part of Virginia closest to D.C around Arlington and Alexandria. Tyson’s Corner hugs I-495, and Reston is closer to Dulles Airport. Another safe bet for runners if working in one of the many office parks in the area is the multi-use path =alongside Fairfax County Parkway, which goes for 28 miles from Herndon to Rt. 95 in Newington.

The immediate Virginia area is served by the Metro, while Metrorail,  Metrobus, and the Fairfax Connector offer additional transport options. The Custis Trail is one of the most popular paths on the Virginia side of DC. Because it serves as a paved connector between the well-traveled W&OD and Mount Vernon Trail, it’s a standard route for cyclists commuting back and forth to DC. However, this strategic location also makes the Custis Trail an ideal spot for a custom run of any length. The trail runs for 4.4 miles ONE-WAY from Gateway Park, just over the Scott Key Bridge (connects Georgetown to Rosslyn), mainly along I-66 (Custis Memorial Parkway) through Arlington. It’s a gradual uphill, 305 foot gain, heading west. Those seeking a longer run can link up with the other bike paths and continue on for miles in either direction. A particularly scenic spot is the eastern end of the trail, where it meets up with the Mount Vernon Path for a nice view of the Potomac and Roosevelt Island. The former Washington and Old Dominion Railroad (known affectionately today as the W&OD) is a beneficiary of the rails to trails program which converts railways to multi-use pathways. As a result, the W&OD Trail runs for 45 paved, tree-lined miles from just outside DC to the pastoral town of Purcellville — or near major northern Virginia areas: Arlington, Reston, Vienna, and Herndon. Runners tend to use the trail as a hop-on/hop-off system for runs of various lengths, but the southeast end of the trail it known for some gentle — and not so gentle — elevation gain. The two hilliest sections are between miles 0 and 9 (~500 foot gain, gentle grade), and Miles 32 and 38.

The Route Map below has the entire 40 mile trail in one map. The Trail Info links to the W&OD home page, which has detailed descriptions of all segments. The closest section to D.C. is in Shirlington, just off I-395 about 4 miles west of National Airport (and the western terminus of the Four Mile Run Trail). Most tourists coming to see the sights in DC will stick to the National Mall and Monuments area, but Old Town Alexandria is an off-the-beaten path gem, with just as much history packed into it as the rest of the capital. Not only was Old Town home to the US’ first president George Washington, it’s a breathtaking waterfront marked by charming brick and cobblestone. For a roughly three and a half mile loop, start out near Waterfront Park in the heart of Old Town. Head up North Union, take a left onto Madison, and follow it until the conjunction with West Street. Where the road ends, you can take Wilkes Street back to the waterfront. Note that the main strip, King Street, is a little too congested for running, but it’s definitely worth a cool down stroll! The DC suburbs may be a metropolitan sprawl, but that doesn’t mean avid trail runners can’t take to the woods. Locals say the best trail running is at Great Falls Park, an 800-acre National Park site where the Potomac River rushes into Mather Gorge. There are a variety of trails here, from technical to easy gravel, so even new trail runners will have a blast. One favored route is the Difficult Run Trail, which actually stretches west out of the park along a stream. Another good option for an easy run is the Old Carriage Road, which spans the vertical length of the park. And of course, you won’t want to miss the River Trail, which overlooks the swift rapids of Great Falls. Yet another long bike path, the Gerry Connolly Cross Country Trail is a 40 mile stretch across Fairfax Country, from Great Falls Park on the Virginia/Maryland border in the south, north to Laurel Hill. While the mostly gravel, sometimes paved trail has plenty of options for both urban commutes and nature runs, locals say it’s at its best when winding through one of the DC area’s scenic stream valleys. For anyone in the Tysons or Reston Area, the section along Difficult Run up to Lake Audubon (2.5 miles one way) is particularly nice, as is the section around Wolf Trap and Difficult Run Stream Valley Parks (about 3.5 miles one way). The home page for the trail has links to 10 segment maps, numbered 1-10 from North to South. Although the W&OD runs straight through downtown Reston, sometimes runners crave something a little different. That’s why we’ve selected this short, 2.3 mile route around Lake Anne, starting and ending in Lake Anne Village center with water views for most of the way. Lake Anne is 1.5 miles northeast of Reston Town Center. Afterwards, you can hit the Farmers’ Market, the Reston Museum, or grab a beer at the Lake Anne Brew House. The route is a fun combination of village streets and the paths of the Blue Trail. The highlight is crossing over the Monet Bridge, especially in spring, when you’ll be showered with a flurry of pink cherry blossoms.

Longer Run/Add-On: Combine with the Blue Trail (1.5 miles to Reston Town Center), or one of the other of an extensive series of trails in the Reston area.
Lake Anne Village Route Map  Reston Area Trails This roughly 8-mile one-way trail follows the Four Mile Run stream from Reagan National Airport to Falls Church. The trail alternates between wooded sections, a series of parks, and some more commercial sections, mainly on the south side of the stream. At the 2-mile mark, just west of I-395, the trail parallels the W&OD Trail, which is on the north side of the stream, connecting near the terminus in Falls Church to the Mount Vernon Trail.
Four Mile Run Route Map

For those looking for a reliable place to run near the office, runners should know that a multi-use path runs along Fairfax County Parkway (Hwy 286) for 28 miles from Great Falls to I-95. Not the most scenic, but it’s useful! The northern terminus is near the intersection of Fairfax County Parkway and Route 7 in Great Falls, and follows the Parkway to West Springfield.