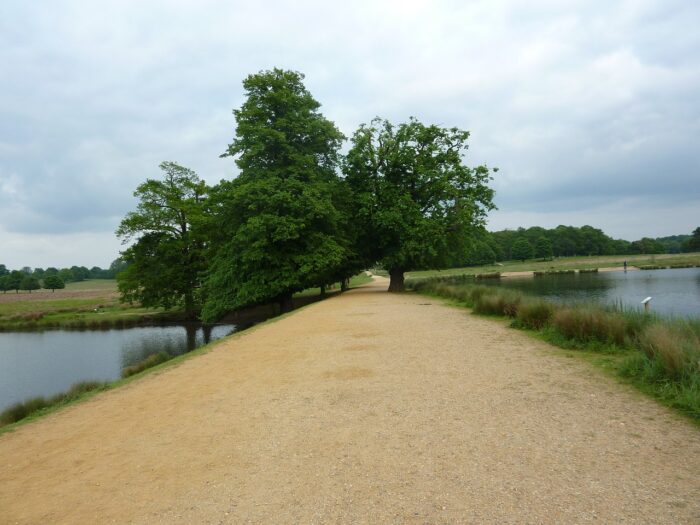 Ruislip Woods: While a bit off the beaten track, the Ruislip Woods are one of the finest forest running spaces in the London Suburbs. Paths are smooth and well groomed. Create your own route, making sure you enjoy a jaunt around Ruislip Lido (lake).  A loop around the perimeter is ~5 km. For more, there’s nearby Mad Bess’ Wood and Countryside Park. Ruislip Woods Route MAP.

Osterley Park: In the Osterley/Isleworth area just south of the M4, is the historic Osterley House.  Runners can put together a roughly 3 km tour around the house and grounds, starting from the parking area and using Osterley Lane. For more, the surrounding neighborhood has lovely streets for running. Be sure to check out the homes along Thornbury Road! Osterley Park Route MAP.

Celandine Route: Another of London’s long distance paths, following the banks of the River Pinn, the Celandine Route clocks in at about 18 km. The surface is mostly narrow dirt trail, and it’s waymarked for the entirety. Start from the intersection with the Grand Union Canal path at West Drayton Station or from Pinner Station in the north. Bonus: there are Underground stations along the way, making for a great one-way running opportunity!  Celandine Route MAP. Route INFO.

Richmond Park/Wimbledon and Putney Commons: Famous for the wild deer herds that graze on the open grasslands, Richmond Park is a gorgeous Royal Park with miles of smooth gravel paths. It’s a peaceful spot for a run among the trees and rolling fields, with lots of route variety. A loop around the outskirts of the park is nearly 12 km, featuring a stretch along the Beverley Brook, a jaunt past the Isabella Plantation, and a scenic view from King Henry’s Mound. . Richmond Park Route MAP. Park Information and Map.

Just adjacent to Richmond Park, runners can find more trails in the Wimbledon and Putney Commons. There are wooded dirt paths around Fishpond Woods and Beverley Meads, but the shady groomed paths in the north end of the Commons are the most popular choice. Loops up to about 11 km can be combined with paths in Richmond Park. Wimbledon Commons Route MAP.

Bushy Park and Hampton Court: Another gem in the Richmond Borough is Bushy Park, the second largest in the Royal Parks system. Originally the hunting grounds of Henry VIII, the park remains a popular sporting destination today for rugby, field hockey, and more. It’s a great running location as well, and the home of the original Parkrun 5k. Runners can get in a great 8 km loop from Teddington, around Hampton Wick and Hampton Court, then up through Diana Fountains and the Woodland Garden before returning. Bushy Park Route MAP.

Hammondsworth Moor: Hammondsworth Moor is just north of Heathrow Airport and near hotels. Lots of roads and paths in here, adjoining the rivers. Also Accommodation Rd. and Moor Rd. Just to the south is Stanwell Moor.

Staines-Upon-Thames:  Just a couple of miles southwest of Heathrow Airport, there are great trails along the Thames, heading west toward Windsor.