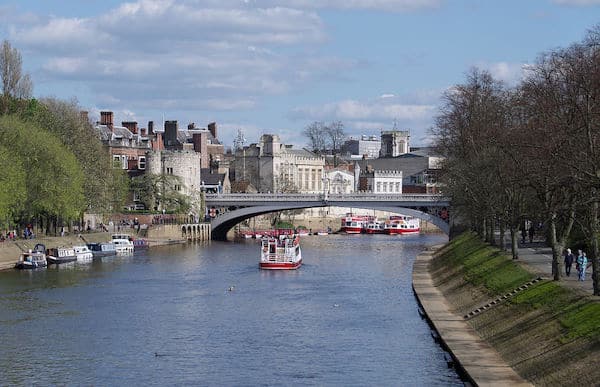 The River Ouse, which runs right through the center of York, has numerous paths and parks alongside it, making for some very pleasant running and nice water views. There are myriad loop options, and additional paths in the parks bordering the river. We’ve put together a 5-mile loop on the more centrally located paths.

Start on the east bank at the S. Esplanade and head south for 1 mile into Millennium Fields, and do a loop of the paths there. Cross to the west bank on the Millennium Bridge, and run north on the paths through Rowntree Park (additional paths in this lovely public park). Continue north, with a brief road section, rejoining the river path at Ouse Bridge. Continue north for another 1.2 miles to Water End Rd., then cross back to the east side, heading back south on the Esplanade Path/Dame Judi Dench Walk. Note: the river path continues north of Water End Rd. for 1.5 miles through Clifton Park & Rawcliff Park.

Add-Ons:  The river path continues north of Water End Rd. for 1.5 miles through Clifton Park & Rawcliff Park, and then for many, many miles north of there. Also, additional paths in the riverside parks. From Rowntree Park, can head a couple of blocks west into the Knavesmire grasslands and Hob Moor.