No Thanks
Zagreb, Croatia 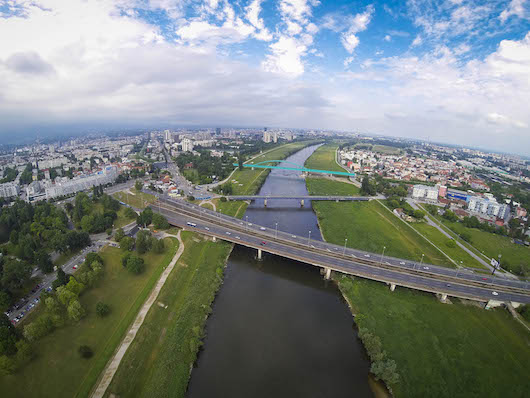 The Sava River Bank (Savksi Nasip in Croatian) is a popular area for locals. Most travelers might not get to see the Sava River up close unless they do this route! There are multi-use paths that go for ~5 km along both the north and south sides of the river, combination paved and gravel. The Liberty/Freedom Bridge (Most Slobode) as an important connector. Note that the paths are not always that close to the river and that there are only views of the water in some sections. Our loop is up to 11 km.

Start near the ‘Liberty Bridge’ on the north side of the river and head east toward the Savica Sports Complex (love the red clay tennis courts!) for 2 km. Cross the Green Train Bridge (Hendrix Bridge, Most Mladosti) and head west towards the Hippodrome, doing a ~1 km loop around City Park and Lake Bundek. Continue west for another ~2 km, then cross the pedestrian Sava Bridge (Savski Most) back to the north side of the river for the final 2 km east to the start.

Shorter Option: Cross back over the Slobode Most instead of going to the Sava Bridge makes this more like a 7 km run.

Only a 10 minute tram ride from the city centre and home to the City Zoo, Maksimir... more...