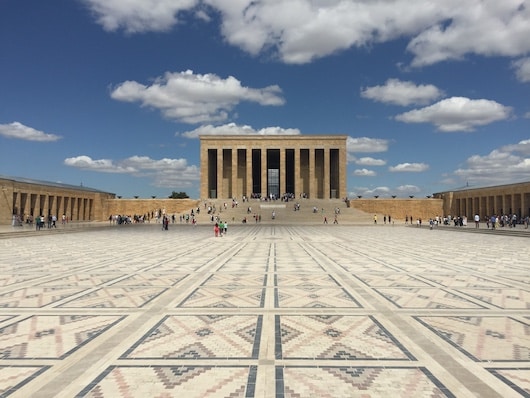 Running along the massive plaza up to the Ataturk Mausoleum (Anıtkabir) is a breathtaking experience. Anıtkabir, the colonnaded tomb for the former president, Kemal Ataturk, and includes a marble hall, turrets & museum. There’s a grand, nearly 1 km approach/plaza, built on a huge scale.

We’ve mapped a route that starts at the Anadolu metro station. Run along the main road, Aniktabir, which is a gradual uphill and has a decent sidewalk. Then, run along the plaza up to the tomb (use respect as you approach the tomb), and then run on the road behind it. Retrace your steps. There are also some paths on either side of the main plaza, which can be used for some variety or a small add-on.

Option: Just across the street (Akdeniz Cd.), behind the tomb, is the Anittepe Sports Complex, which has a nice soccer field and a running track.