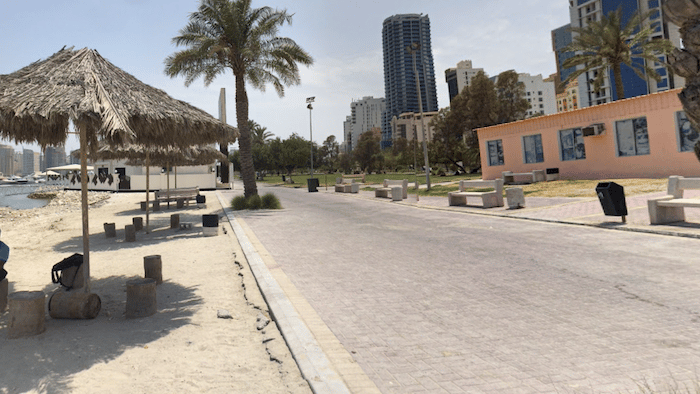 The run from Marina Beach Garden Park in Manama to AlGhous Park in Muharraq is a pleasant route, mostly along waterside paths. It can be a quick ~8.5 km out and back, or made into a longer run exploring other waterside roads and paths in Manama.

Start at Marina Beach Garden Park and run along the the waterside path toward the Bahrain Museum for 1 km. Next, explore the impressive grounds and buildings of the Museum and Cultural Hall. Continue on the small road adjacent to the Shaikh Hamad Causeway, and run over the causeway (~1 km). The exit is a bit of a tangle, but it’s worth it for the pleasant run through the green, waterside AlGhous Park. The option now is to retrace your steps, or take a longer run (see our Manama waterfront route).

Longer Route: Can continue past AlGhous Park over the 3 km Shaikh Isa Bin Salman Causeway (busy but a good pedestrian path), where you can either return to Marina Beach Garden Park or continue to explore waterfront paths of The Avenues and Bahrain Bay (Four Seasons), and even further over to Reef Island and the Ritz Cartlon/Royal Marina area.

Causeways Loop. A quick & easy 5k is to run the two causeways: Shaikh Hamad Causeway (near Bahrain National Museum) and Shaikh Isa Bin Salman Causeway/Bridge. There are decent pedestrian pathways over both, and nice water views.

The signature run in Bahrain, nearly all off-road. Loop around the Dohat Arad Lagoon is 3 km,... more...