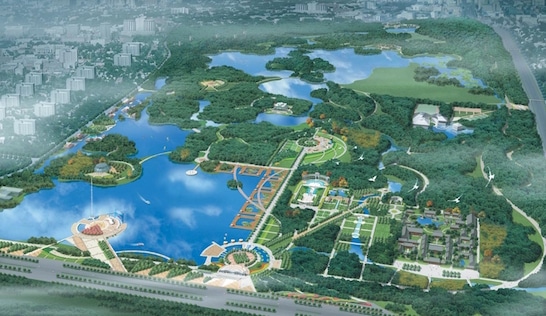 Built in 1984, this is Beijing’s largest park and one of the quietest places for running in central Beijing. It’s very green, with many paved paths interlacing the park. A positive for visitors is the presence of English language signs. The park features flower gardens, fairground with rides, Sony ExploraScience, landscaped areas and several large swimming pools. Bicycles and boats may also be hired at various locations in the park. In terms of running, it is difficult to describe a particular route, since there are so many paths, and there is not a straightforward ‘park perimeter’ path. There are some lovely nature gardens, fountains, and landscaped areas. The park was the site of the Olympic Volleyball tournament, which has been turned into a bathing beach with open air pool and volleyball courts . More info on the park here. Note that admission is required.

This is a popular place for group events. HeyRunning organizes the free Peoples Run 5k the last weekend of every month at Chaoyang (Sun) Park, meeting at West Gate 3.