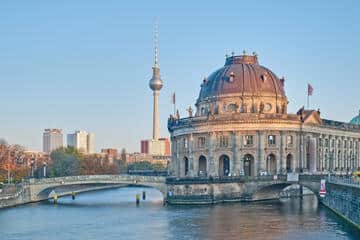 This is a “jogging sightseeing” tour, incorporating some of the visitor highlights of Berlin. It’s about 7.5 miles, and you can jump on or off depending on whatever location is most convenient. Our route starts at the centrally located Alexanderplatz — a major transport and shopping center, and near the Berlin Congress Center. There are several examples of important German architecture and history in this area. Head west, running by the Aquarium, East Germany museum, and on the river, just across from the Museumsinsel — an island with several of Berlin’s important museums. Head south, passing by the Berlin opera and the Communications Museum, to Checkpoint Charlie. Pass by a center documenting Nazi atrocities, up to the Potsdamer Platz — a square at the heart of the city’s history, and area with several concert halls and theaters. Head north, on the outskirts of Tiergarten to the Brandenberg Gate and German Parliament (Reichstag). The run concludes with a 2 mile jaunt east, through the University of Berlin, along Unter Den Linden, a wide street with many important building and museums. Easy add-ons to this run are the paths of Tiergarten, See river paths, or west along the Kurfürstendamm.