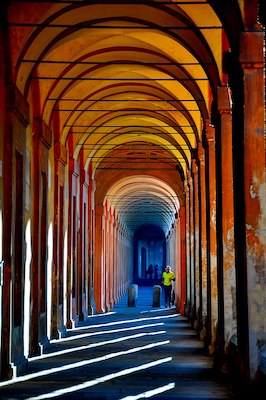 Here’s a unique run to add to your bucket list (or do when it’s raining…) — the longest covered arcade in the world! The Portico San Luca was built between 1674 and 1793 to provide shelter for worshippers making the long trip up the hill to the Sanctuary of the Madonna di San Luca. From the center of Bologna at Porta Saragozza, the arcade runs for 3.5 km to the Sanctuary, featuring 666 arches. There are great views through the porticos. The route follows SS64 for a flat 1.5 km to Arco Del Meloncello, then climbs nearly 200m along Via San Luca over the final 2 km, with 8-13% grades. Note some of this involves steps. This route can get crowded during tourist season…good to go early to beat the crowds. Bonus: well lit at night and quite special to run then.

Longer Run: From the Sanctuary, you can continue on Via San Luca for another ~ 2 km downhill to Parco Talon. There’s some nice running there as well, and it’s fairly flat.