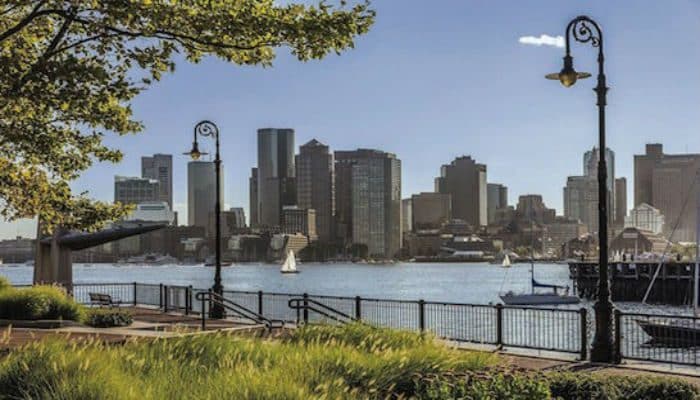 This is one of our favorite ‘hidden gem’ places to run in Boston. East Boston is the neighborhood across the Harbor and adjacent to Logan International Airport. There is a some terrific running here, accessible from the city via a quick Blue Line trip (Airport or Maverick station), and a good option for those staying at one of the airport hotels. We’ve mapped a 5-mile one-way route that includes a waterfront path, Piers Park, and the East Boston Greenway that goes for 2+ miles through Bremen Street Park and as far as Constitution Beach. Do it all or in sections!

A gorgeous waterfront path runs for 2 miles from the Hyatt Boston Harbor Hotel to Lopresti Park. There are great views of the water and the Boston skyline, as the path heads along the HarborWalk from the Hyatt Hotel, past fishing docks, ICA Watershed, and loops through the  very pleasant Piers Park. Just west of Pierce Park, a series of new waterfront apartment buildings feature a developing series of waterfront paths just past Lopresti Park.

At Marginal St./Bremen St., connect to the East Boston Greenway, a multi-use path that runs for 2+ miles north to Constitution Beach. It’s 0.5 miles to the Airport underpass, and then 0.5 miles through the attractive Bremen Street Park (library branch, fountains, restrooms). At the north end of the park (library), CROSS  Rt. 1A to continue for 1 mile along the Greenway to Constitution Beach (this part is less scenic…). At Constitution Beach, there’s ~1 mile of paved paths, and the beach is decent for running.

Optional Spurs: nearly 1 mile loop around East Boston Memorial Park, which comes right off the Greenway at the south end of Bremen Park (included on our map).