A guide to running in Boston. See also our guides to Boston's North Shore and South Shore 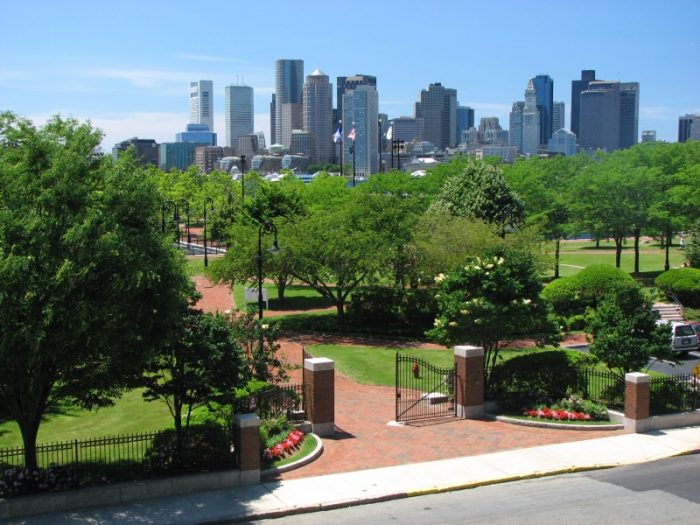 Boston is among the world’s great running cities. In addition to its bucolic setting, Boston is host to the famed Boston Marathon, headquarters of numerous running shoe companies, and home to 150,000 college students. Some of the most famous city runs in the world are located in Boston, from the Charles River Paths to the greenery and majesty of the Olmsted-designed Emerald Necklace. There are also some spectacular runs along the much-improved Boston Harbor, and some great waterfront runs in South Boston and East Boston. Our guide to running in Boston also includes several tours featuring Boston’s history: the Freedom Trail, Bunker Hill, and the Battle Road (Lexington to Concord). As homage to Boston’s famed universities, enjoy our running tour of Harvard and MIT, as well as the bucolic Wellesley College, located west of Boston. We’ve also included a guide to the Boston Marathon course. We’ve recently added recommendations for the best residential running spots near downtown, and in the immediate western suburbs of Brookline, Newton, and Wellesley. For destination runs, take a ferry to the Harbor Islands in summer, and in fall, enjoy or ‘foliage’ routes in Carlisle and orchard country west of Boston. For more fantastic runs in the Boston area, see our guides to Boston’s North Shore and South Shore.

Boston is quite compact. Staying downtown in Back Bay or the financial district, or on the other side of the river in Cambridge will provide good access to running on the Charles River paths and some of the historic sections of Boston. The burgeoning Seaport area, which is the Convention Center is located, has some great running along the water.

Boston’s transportation system, called “The T” is good but a little old and creaky. The downtown area is well served by subway lines, while commuter rail heads out to suburbs north, south, and west. 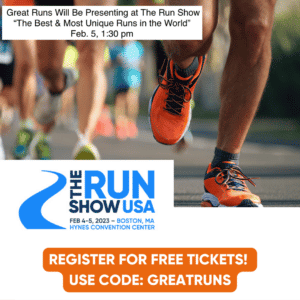 Some of our favorite runs in Boston, MA 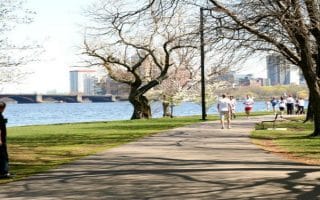 Along the Water | Iconic | Classic River Paths
One of the most famous runs in the country. Run all the way from downtown to Newton! Sections on the Boston side and Cambridge side, with numerous bridges along the way, allowing for great loops.
Explore

Along the Water | Iconic | Seaside Promenades
As a result of the Big Dig project and development of the Seaport district, it's possible to run about 14 miles from Charlestown to the UMASS Boston. Most of it very pleasant along the water! We've detailed several sections
Explore 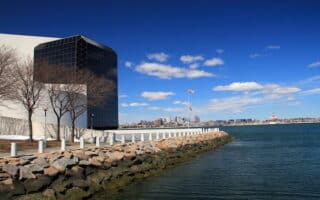 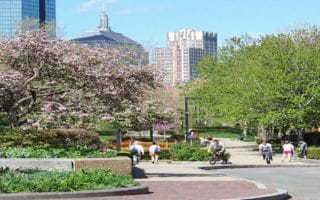 Multi-Use Trails | Parks | Rails-to-Trails
In the 1980s, the old orange line trolley was put underground. The result is a beautiful running path that starts in the heart of Back Bay and continues all the way to Forest Hills, 4 miles one-way.
Explore 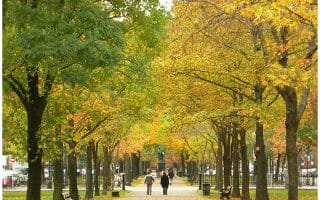 Gorgeous Residential | Historic / Tourist | Fantastic Neighborhoods
A great tour of Boston's Back Bay. Includes the Commonwealth Ave. Mall, Public Garden, State House, and a jaunt along the river. Captures so much of Boston in one run!
Explore 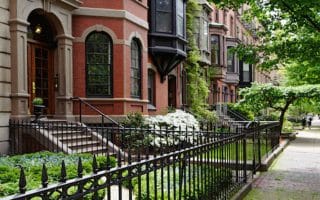 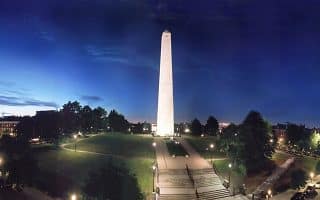 Along the Water | Gorgeous Residential | Historic / Tourist
Another classic run that includes Boston's history and the water. Run up to the Bunker Hill Monument, and then enjoy the Harborwalk past the USS Constitution and along the water. Near downtown and river paths.
Explore 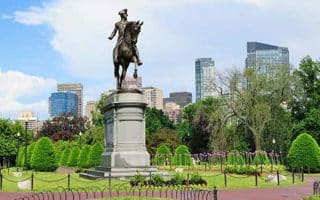 Historic / Tourist | National Parks | Runseeing
The Freedom Trail is a 3-mile route around the city of Boston and Charlestown, that marks some of Boston’s most famous historic landmarks.
Explore 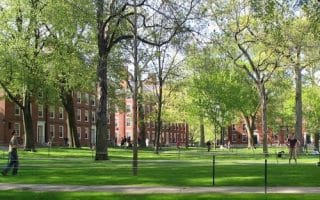 Along the Water | Gorgeous Residential | Historic / Tourist | Universities
Two of the most famous universities in the world are also popular visitor destinations. We've designed a 'running' tour of both campuses, which are 2 miles apart and are linked by either neighborhood streets or the Charles River Paths.
Explore 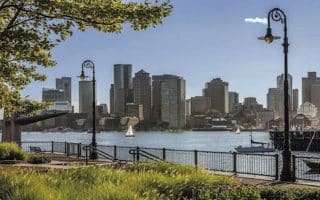 Along the Water | Multi-Use Trails | Parks | Near Airport | Rails-to-Trails
Fabulous running across the Harbor in East Boston, adjacent to Logan Airport. 2+ miles of gorgeous waterfront paths, then 2+ miles along the East Boston Greenway through Bremen Street Park to Constitution Beach. 10 mins from downtown on the Blue Line.
Explore 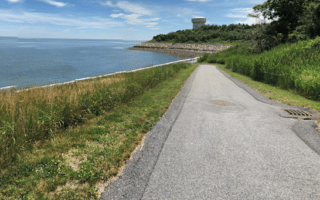 Along the Water | Great Views | Multi-Use Trails | 'Unique' Runs | Seaside Promenades
Great waterfront running on Winthrop Shores Drive, and then the best run you'll ever do around a waste treatment plant, using a 2.5 mile perimeter loop around Deer Isle with 360° ocean views. Do in sections or combine for nearly 8 miles.
Explore 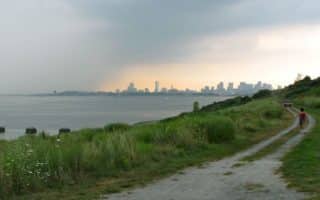 Along the Water | Great Views | Trail Running | National Parks
The Boston Harbor Islands National Park features 34 islands and 35 miles of undeveloped shoreline. Spectacle Island is the most run-able, with 5 miles of trails. Deer Island, accessible by land, has a 2.6 mile path with great views.
Explore 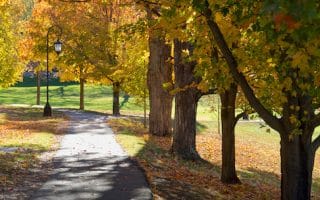 Along the Water | Gorgeous Residential | Trail Running | Fantastic Neighborhoods | Foliage | Olmsted | Universities
Wellesley is a fabulous suburb for running. Enjoy a route around the paths of Olmsted-designed Wellesley College and the 2.75 mile path around Lake Waban, plus adjacent residential streets and the Crosstown Path. Two great running tracks too!
Explore 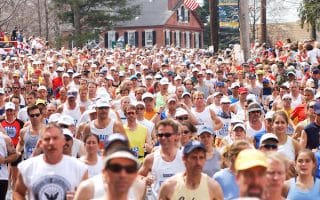 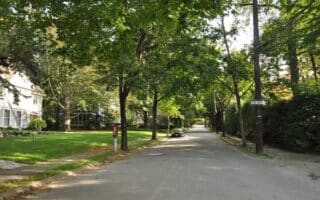 Gorgeous Residential | Fantastic Neighborhoods
A guide to some of Boston's most attractive neighborhoods for running. Downtown, explore the Back Bay and South end. Just west, we've outlined choice neighborhoods in Brookline, Newton, and Wellesley.
Explore 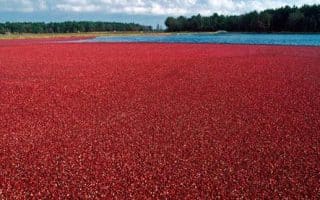 Great Views | Trail Running | Foliage
There is nothing quite like the views of cranberries at harvest. The Cranberry Bog has paths along a dike with great views. Enjoy this in combination with 1,000 acre Great Brook Farm State Park, which is 1.5 miles away and has wonderful trails for running.
Explore 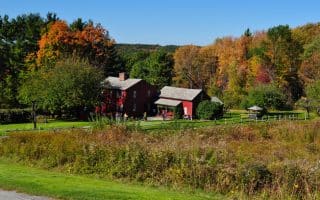 Great Views | Hilly | Foliage
Three routes in the orchard towns of Harvard, Stow, and Bolton west of Boston around I-495. Lovely roads, with hills and views to orchards and the valley. Enjoy 5 or 10 mile options from the Apple Harvest Ramble, or a route along the Assabet River Rail Trail.
Explore

Along the Water | Iconic | Classic River Paths
One of the most famous runs in the country. Run all the way from downtown to Newton! Sections on the Boston side and Cambridge side, with numerous bridges along the way, allowing for great loops.
Explore

Along the Water | Iconic | Seaside Promenades
As a result of the Big Dig project and development of the Seaport district, it's possible to run about 14 miles from Charlestown to the UMASS Boston. Most of it very pleasant along the water! We've detailed several sections
Explore

Boston’s climate is influenced by the ocean. Summers are warm to hot, and it can be humid. Autumn is gorgeous. Winter can be harsh, with 45 inches average snowfall — but many storms in the winter change from snow to rain due to the ocean effect. You have to be careful in spring, as northeast winds can keep the weather cool and damp.

If you want to be within a mile of the Charles River paths, the best place to stay is in Back Bay or on the Cambridge side of the path. If you want to be near the waterfront paths, you can stay in the Financial District, near North Station and Charlestown (which also place you near the river paths) or some of the newer hotels in the Seaport area. If you’d like to connect with some group runs in Boston, here are some good options.

CommunityIf you’d like to connect with some group runs in Boston, here are some good options.

If you’d like to connect with some group runs in Boston, here are some good options.