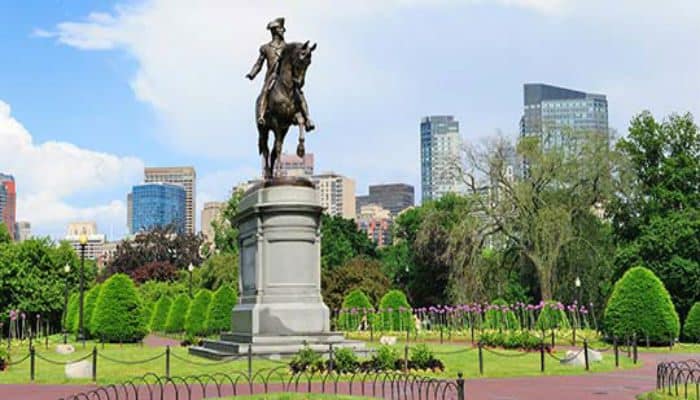 The Freedom Trail is a 3-mile route around the city of Boston and Charlestown. It’s one of the more famous urban walks in the United States. Marking some of Boston’s most famous historic landmarks, the Freedom Trail is also popular among runners — though best to go early as the Freedom Trail is mostly a marked brick path along city sidewalks. The most popular sites on this route include the Boston Common, Park Street Church, Massachusetts State House, Granary Burying Ground, King’s Chapel & Cemetery, Old South Meeting House, Old State House, Boston Massacre Site, Faneuil Hall, Paul Revere House, Old North Church, and Copp’s Hill Burying Ground.  Attached are links to more information about the Freedom Trail and the route, as well as a walking/running map.

Boston Common: Established in 1634, Boston Common is America’s oldest public park. Considering puritan colonists purchased the land from the first settler of the area, and split the costs, the pasture became known as the “Common Land,” and was used to graze local livestock until 1830.

Massachusetts State House: Known as one of the oldest buildings in Beacon Hill, the Massachusetts State House was designed and completed by Charles Bulfinch on January 11, 1798. Widely acclaimed as one of the most magnificent public buildings in the country, its most distinct feature is the golden dome, which was once made of wood but is now overlaid with copper. It is under the dome that senators, state representatives, and the governor conduct the daily business of the commonwealth. Park Street Church: Located at the corner of Park and Tremont Streets, atop Boston’s town grain storage building, the Park Street Church was founded in 1809. Once the first landmark travelers saw when approaching Boston, the 217 ft. steeple was designed by Peter Banner. Widely known for supporting abolitionist causes, the Church’s lofty architecture reflects an even loftier mission of human rights and social justice.

Granary Burying Ground: Established in 1660, some of America’s most notable citizens rest here. The historic cemetery has 2,300 markers, with an estimated 5,000 bostonians who have made the Granary their final resting place.

King’s Chapel & Cemetery: Known as Boston Proper’s first burying ground, King’s Chapel Burying Ground is located next to King’s Chapel on Tremont Street. The famous burying ground boasts a multitude of famous residents including John Winthrop, Massachusetts’ first Governor, and Mary Chilton, the first woman to step off the Mayflower. Joseph Tapping’s stone in the front of the burying ground, where a skeleton and Father Time battle over the eventuality of death, may be Boston’s most beautiful headstone!

Old South Meeting House: Once the biggest building in all of colonial Boston, the Old South Meeting house has been the stage for some of the most dramatic events leading up to the American Revolution, including the Boston Tea Party, which occurred on December 16, 1773. During the Boston Tea Party, 30 tons of taxable tea salt were the holds of three ships moored at Griffin’s Wharf. If the team was unloaded a tax would have to be paid to England – and people did not want to pay the tea tax when they had no representative in British government. With this, five thousand colonists crowded into Old South Meeting House to decide what was to be done with the tea.

Boston Massacre Site: The tensions that led to the Boston Massacre were the product of the occupations of Boston by Redcoats in 1768. Redcoats were sent to Boston to protect customer officials from violent riots during Townsend Duties. With this, on March 5, 1770, a violent clash broke out when Private White, struck Edward Garrick in the face with the butt of his musket for insulting his commanding officer. White soon found himself surrounded by an angry and violent mob. When more soldiers showed up to defend White, the mob only became more violent and shots began to fire. By the time the smoke cleared, five men lay dead or dying.

Faneuil Hall: Known for hosting America’s first Town Meeting, Faneuil Hall is often referred to as “the home of free speech,” and the “Cradle of Liberty.” Built in 1741, Faneuil Hall became home to an intricate collection of events that shaped the nation’s history. Having served as an open forum meeting hall and marketplace for over 270 years, this is where the Sons of Liberty proclaimed their dissent against Royal oppression. Paul Revere House: Known as the oldest remaining structure in downtown boston, and the only home on the freedom trail, the Paul Revere house was built in 1680. Paul Revere purchased the former merchant’s dwelling in 1770. Revere and his family lived here when he made his famous messenger ride to Lexington on April 18-19, 1775.