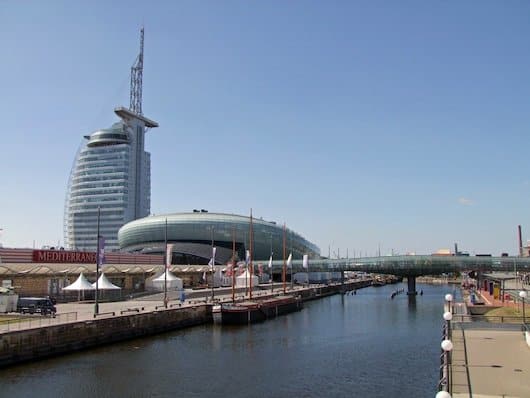 Bremerhaven is a port city on Germany’s north sea coast at the mouth of the Weser River. Considered part of the greater Bremen area, the city has deep history in fishing and navigation. The best places to run in Bremerhaven are the numerous paths along its attractive waterfront ports, which can be combined in numerous ways. There are also plus some nice interior parks.

Geeste & Port Loop. 8km. In the Mitte waterfront district, there are nice paths along the Geeste River and the Neuer Hafen port area. Start just west of center off Am Geetebogen, and run for ~2 km along the river path, enjoying the nice water views. At the end of the path, continue east toward the Weser River, passing the Bremerhaven Radar Tower, and then run north on the port-side promenade paths along the river for 3 km, passing the Zoo, Shipping Museum, to just past the Pingelturm, a colorful waterside tower in Neuer Hafen. Retrace your steps for 1 km, turn LEFT on Schleusenstraße, and run along the eastern side path in Neuer Hafen, using Keilstraße to return to the Geeste.

Unterfeuer & Dampfer Welle. Up to 13.5 km. This is an exploration of southern waterfront paths. Start at the Schleuse locks and run along the Unterfeuer Bremerhaven along the Weser River for up to 3.5 km. Retrace your steps. and then enjoy another few km along the paths along the green space south of Elbinger Platz and around the Dampfer WELLE historic ship.

Bürgerpark & Park Reinkenheide. Two attractive parks just east of the center. Bürgerpark is the larger of the two and has lovely, wide paths through woods and around fields. A loop around the perimeter is ~3 km, and there are additional interior paths. Park Reinkenheide is located 1.5 km east of Bürgerpark, and features ~2 km of nice paths.

A nice spot for a standalone run or done in combination with Bürgerpark. Several km of crisscrossing... more...

The Wallanlagen is a linear park built in the 18th century on the site of the city's... more...