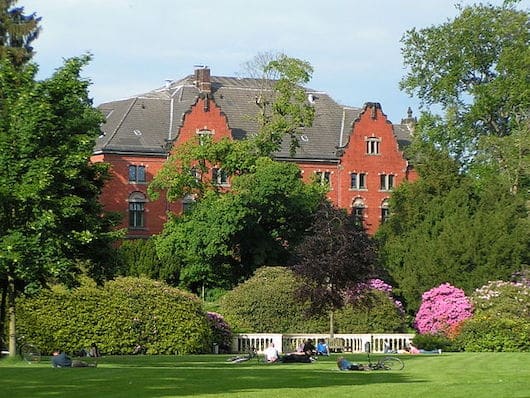 Oldenburg, located 50 km west of Bremen, is considered part of the greater Bremen area. There are some nice parks and waterfront paths for running in Oldenburg.

Waterfront Paths. There are numerous attractive waterfront paths in Oldenburg. From the port (Hafen), run for up to 3.5 km along the Osternburger Kanal. (ROUTE MAP). We also love running along the multi-use paths along the Hunte River. Starting at the Schleuse Oldenburg (locks), it’s a loop of up to 8.5 km. (ROUTE MAP). The waterfront paths can be combined, and also can be accessed from the southern end of the Schloss Gardens (run through the Stadium grounds paths) for some fun combo routes.

Hunte River East Multi-Use Path. For a longer, off-road run, a multi-use path runs along the Hunte River for up to 8 km east to the Moorhauser Polder nature preserve. MAP

A nice spot for a standalone run or done in combination with Bürgerpark. Several km of crisscrossing... more...

The Wallanlagen is a linear park built in the 18th century on the site of the city's... more...