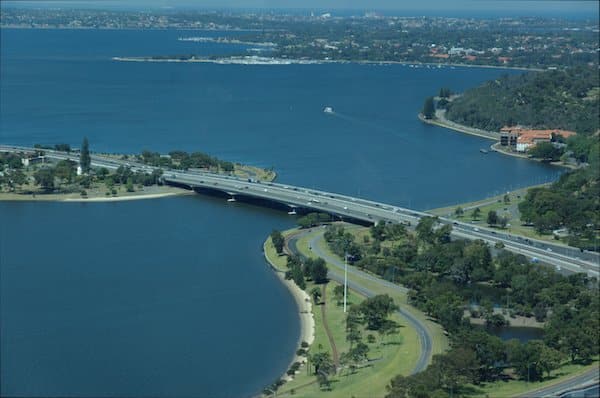 There are 25 km of paths along the Swan River in Perth. The run known as ‘The Bridges’, is one of the most popular routes in Perth. This quick, nearly 10k loop along a paved multi-use trail between the Causeway and Narrows bridges provides spectacular views of the Perth skyline, Kings Park, the Swan River and South Perth’s park land. And it’s impossible to get lost! This loop can be completed in either direction, however many purists believe it should be run anti-clockwise (I personally prefer clockwise). The recently developed Elizabeth Quay Bridge or Bell Tower on the city side of the river are typical start/finish points, although the official start is at the Wesley College Boatshed in South Perth. Water fountains and public toilets are also available at regular intervals. Add-On: Do the 3.3 km loop around the gravel paths of Heirisson Island, which comes off the Causeway Bridge.

Additional River Running: The river trail can be followed north of the Causeway on either side of the river: On the east side, to Burswood Park and Optus Stadium to Highway 8 (adds on 5 km) or on the west side, towards Gloucester Park and connecting with our Claisebrook Cove route to Bardon Park. Can also continue south of the Narrows Bridge on a path paralleling Highway 2. It’s a wide, separated path with great water views, but is alongside a busy highway.

Another opportunity for some pleasant running along the Swan River, just north of the main Bridge-to-Bridge route.... more...