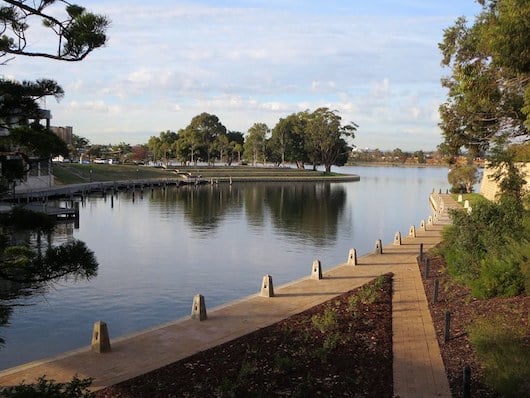 An extension of the Swan River trails, there is nice running at Claisebrook Cove, starting at Mardalup Park and heading north. This attractive waterfront trail passes through Banks Reserve, Bardon Park, and Berringer Park, for an out and back of 6.75 km. There are restrooms and water fountains in the parks. It can also be an add-on to the Bridge-to-Bridge loop, less than 1 km to the south.

Add-Ons/Longer Run. For a longer run, take the pedestrian bridge over to the Optus Stadium area, where there are paths along the water and around the stadium, making for a loop of up to 5k. For a grand tour, use that bridge to then head south to join the East Perth section of the Bridge-to-Bridge route, via McCallum Park and Sir James Mitchell Park/Perth Zoo.

Claisebrook Cove is also home to Parkrun, a free group 5k held every Saturday morning. You can see the course map and learn more here (https://www.parkrun.com.au/claisebrookcove/)