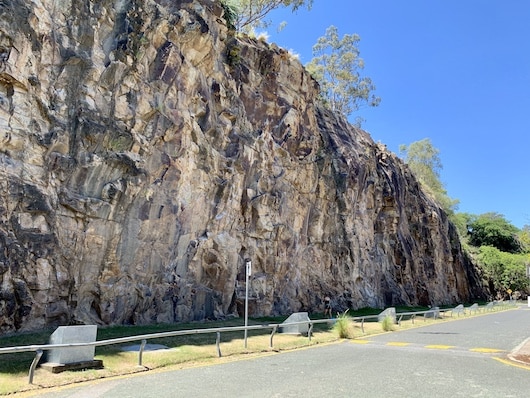 Kangaroo Point, located across the Brisbane River and just east of the CBD, is a good option for a standalone run or done in combination with other routes in the area (despite the name, don’t expect to see any kangaroos). It’s also (in) famous for the Kangaroo Point Stair Climb, which consists of 107 steps used to climb the eastern end of the cliffs, affording panoramic views of the city and the Brisbane River. The stairs are popular for running challenges.

The best route specifically on Kangaroo Point incorporates waterfront paths and several parks. From the Dockside Ferry Terminal, it’s 1 km to Captain Burke Park, 1.75 km to the Thornton Street Ferry Terminal, and 2.8 km to the stairs (just past the Six Wheels Peddler cafe). From there, one can continue to the Queensland Maritime Museum for a ferry back to Thornton Street Ferry terminal, a longer run along Southbank, or the Goodwill pedestrian bridge to the Botanical Gardens and the City Reach Boardwalk (part of our River Loop path).