No Thanks
Brno, Czechia 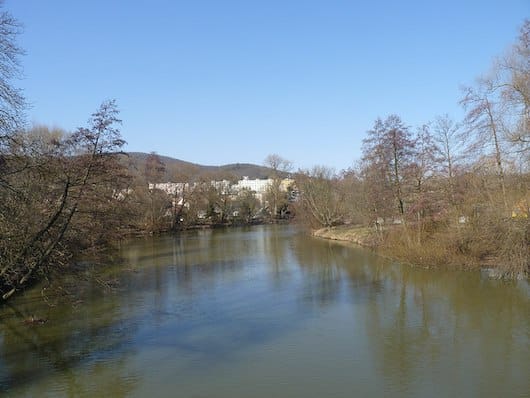 There’s a nice network of pedestrian & cycle paths along the Svratka River, which flows south of the historic centre. We’ve mapped two separate routes, which can be combined for many km of off-road awesomness! Overall, we prefer the southern loop.

South Loop. This makes for a nice 6.4 km loop, incorporating paths on both banks of the river. There are nice water views for much of the route. Starting at the Vídeňská Bridge, head south along the west bank of the river, on a paved cycle path for 3 km to a pedestrian bridge near the KŠÍROVKA sports complex. Cross to the eastern side, and run back along the cycle path to the bridge.

North Direction. The paths headed north are a little less seamless, but still worth running! There are a couple of road sections. We’ve mapped up to 7 km north to Brno-Komín. From the Vídeňská Bridge, run for 0.8 km along Kamenná on the south/west bank, and then onto the cycle path for a 50m climb over 0.5 km. Continue north to the Anthropos Archeological Museum (3 km mark). North of there, it’s a combination path & road along the river for up to another 3.5 km to the Sportovní sports complex.

One of our favorite 'runseeing' tours in Europe. Explore the largely pedestrianized old town, Lužánky Park, the... more...