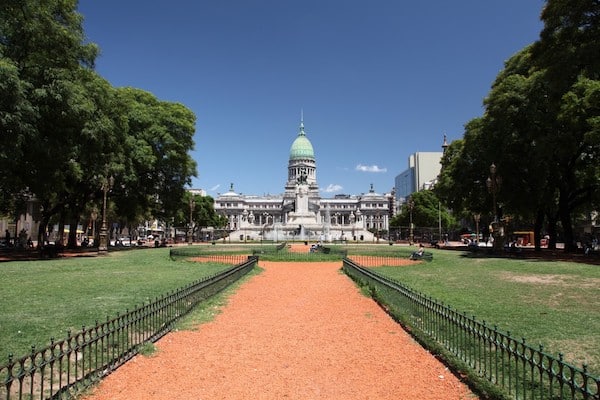 Running between Plaza del Congreso and Plaza de Mayo is a nice quickie loop connecting Aires’ most political and historical plazas. Plaza del Congreso was inaugurated in January of 1910 and is overseen by the Monument of the Two Congresses. The plaza is accompanied by Plaza Mariano Moreno and Plaza Lorea, all of which were designated a National Historic Monument in 1997. Included sites in this area are the “Kilometer Zero” marker, an original cast of The Thinker, the Monument of Mariano Moreno, and the Monument of José Manuel Estrada.

Plaza de Mayo is the main plaza of Buenos Aires’ Monserrat barrio and was the scene of the May 25th 1810 revolution that lead to independence. Since that point, the plaza has become a landmark for political activity. Sites surrounding Plaza de Mayo include La Casa Rosada, May Pyramid, Buenos Aires City Hall, and the Metropolitan Cathedral of Buenos Aires.

For our running loop, we recommend beginning at either plaza and embarking on either Avenida Rivadavia or Avenida Hipólito Yrigoyen and returning on the opposite. Both streets are well shaded and have wide sidewalks.

Longer run options: See our Casa Rosada route (5.3 km), or north-south along Av. 9 de Julio. Several of our other routes are in this area.