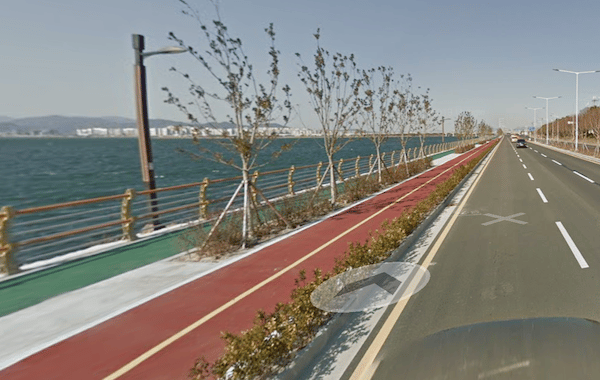 The multi-use trails along the Nakdong River are among the best spots for a longer, seamless off-road run in Busan. The paths are nearly continuous on the river’s east side, although we’ve divided them into three distinct sections that each have their own character and scenery.

South Section: This paved multi-use path runs along the east side of the river from Dadaepo Beach north to Gamjeon-dong for 10.8 km. The red-colored trail is separate from the road, is popular for biking, and features great views of the river nearly the whole way.  At the 6 km mark, the Nakdonggang Bridge leads to Eulsukdo Island (see our route there).

Mid-Section: Just north of Gamjeon-dong, a pleasant, tree-lined park runs alongside Gangbyeon-daero Rd. for nearly 6 km to the Jungang Expressway. While this section is not alongside the river, the paved path is especially pretty during blossom season.  A nice addition, at the 2.6 km mark, is Samnak Riverside Park. There are paths along the river and around large fields, as well as sports facilities and a running track. Transport access: Gwaebeop Renecite

North Section:  A couple of km north of the Jungang Expressway, a linear park alongside the eastern side of the river runs for 3.5 km north. There a nice, well-landscaped paths along here, with boardwalks to some overviews. Transport access: Deokcheon station at the south end and Hwamyeong station at the north end.