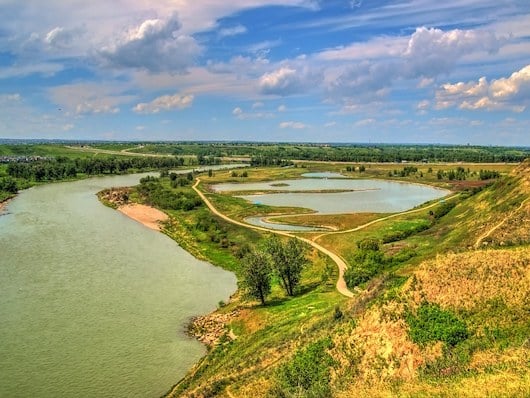 Fish Creek Provincial Park, 10 miles south of downtown Calgary, is the largest urban park in Canada, stretching nearly 20 km from east to west. The park features 80 km of trails, of which 30 km are paved and 50 km are. It’s home to a large variety of natural wildlife, including deer, coyotes, owls, beavers, and 200 bird species. Parking is available throughout the park and the LRT also stops within the park limits.

For running, this excellent trail map shows all the options, including a table with segment distances between key areas. Macleod Trail is a road that bisects the park. The terrain is more wooded to the west of Macleod and more open & prairie-like to the east of it. The paved path runs from one end of the park to the other and mixed surface trails also meander in and out. From Shannon Terrace at the western end, it’s up to 16.7 km to Lafarge Meadows at the southeastern end, and 14.3 km to Mallard Point at the northeastern end.  All trails are clearly marked.

Add-Ons: From Mallard Point at the northeast end of the park, can connect with the Bow River Pathway, which heads north toward downtown Calgary or south to Rotary Nature Park.

The park map link doesn’t work, it must be out of date!