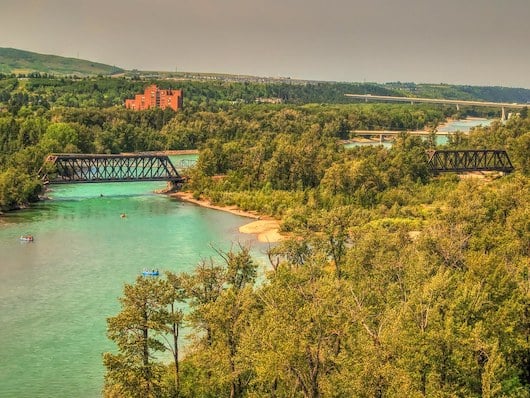 In the northwestern part of Calgary, there are several parks centered around the Bow River that can be combined for a very pleasant run. The Bow River Pathway helps bind these together. We suggest parking at Bowness Park or Baker Park. Enjoy paths around Bowness Park, then use the Bowness Bow River Bridge at 85 St. NW to cross into Bowmont Park, where there are several km of natural paths around grasslands and a couple of lagoons, with some nice views.

North of Bowmont Park, there’s are paths and nice streets in the Tuscany residential area, including the paved Twelve Mile Coulee Pathway, which goes north to Tuscany Springs Blvd. NW.

Among the largest urban parks in Canada, stretching 20 km from west to east. There 30 km... more...