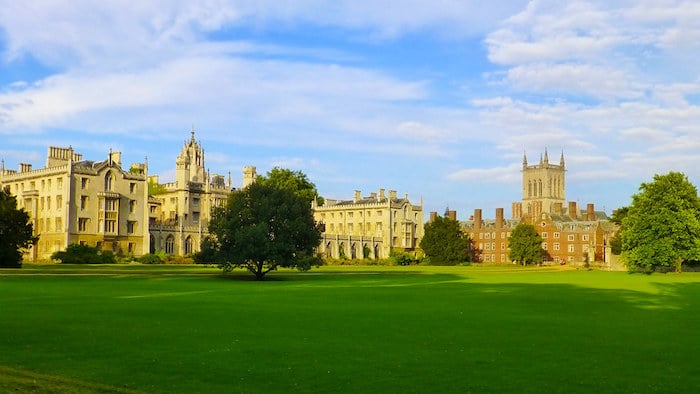 The University of Cambridge is one of our top 10 university running tours. This prestigious medieval university is comprised of 31 colleges, and features impressive jaw-dropping gothic architecture, riverside paths, open meadows and greens, and impressive athletic fields. Rather than being enclosed, the campus and the city of Cambridge are very much intertwined. It’s difficult to map out a specific route through the university’s grounds. Use our route map as an overview, or print out this campus/city map. Rather than describe a specific route, here are some suggested sections, using the Cambridge Visitor Information Center (next to King’s College) as the start point. Most of the campus is in the area between the A603 to the east/south, the M11 to the west, and Chesterton Rd. to the north.
1) King’s College River area: several colleges and impressive buildings along the Cam River.
2) Christ’s Pieces to Parker’s Piece, then west Coe Fen, north on the paths to Mathematical Bridge.
3) Queen’s College, then West Rd. through Sidgwick Site, then Robinson College/Library to Adams St.
4) Adams St. west to do a tour of Athletic Fields. Can add-on here with more around athletic fields and adjoining farms.
5) Return to start via St. John’s College & Trinity College.
Share:
Essentials
Route Map Area Overview Map