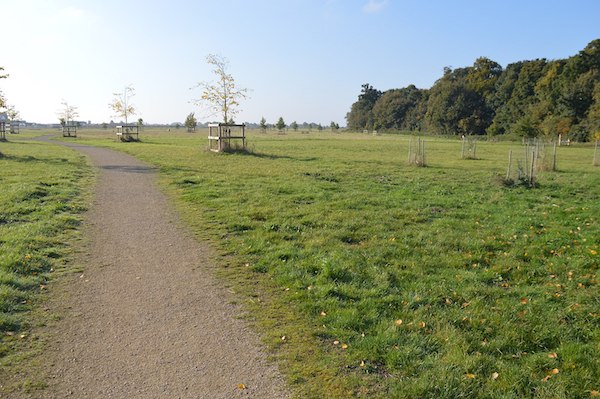 Trumpington Meadows is a 58-hectare park in the southeast part of Cambridge that’s a lovely spot for a run. The trails are a nice mix of fields, meadows, woodland, and paths along the Cam river. The park straddles both sides of the M11 and sits alongside the Byron’s Pool Nature Preserve. The paths are wide, with good footing.

A non-overlapping run in the park can be ~3 miles. It’s about 2 miles between the northern and southern parts of the park and 0.5 miles east-west. This leaflet & map has a good overview. Also, see this marked 3 km route of Trumpington Meadows and Byron’s Pool.

Add-On: Grandchester Meadows, about 0.5 miles north, also has some nice paths and quiet roads passing by farms. Near there is Lammas Land and Sheep’s Green, for even more park and meadow running!