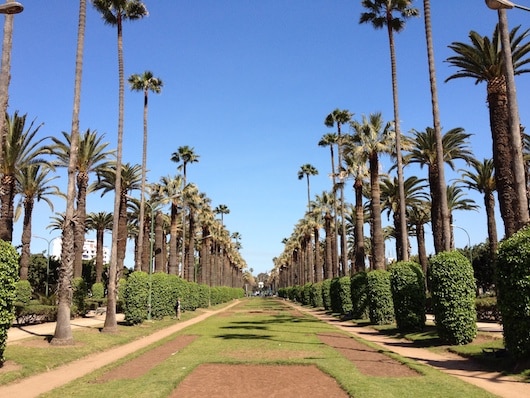 This run combines one of the best long, continuous streets for running with a jaunt around the pretty Arab League park and two of the city’s grand squares. The palm-lined Boulevard Moulay Youssef extends from the Mosque Hassan II, away from the water for 2 km. It’s a good, wide street for running with good sidewalks and some

shade, passing by numerous consulates, churches, and other sites. Then, do a jaunt around Casablanca’s largest park, the nicely landscaped Arab League Park/Park Yasmina, with the splendid Sacred Heart Church of Casablanca at the edge. At the northern end is the Place des Nations Unies — a large square surrounded by numerous shops and restaurants. Do a loop around here, and then around the grand, modern, Mohammed V Square, with its popular Pigeon Fountain, surrounded by by buildings in a Neo-Moorish style. Return to Boulevard Moulay Youssef for the return.