No Thanks
Chicago: Downtown & Central

The 606 (Bloomingdale) Trail and Area Parks 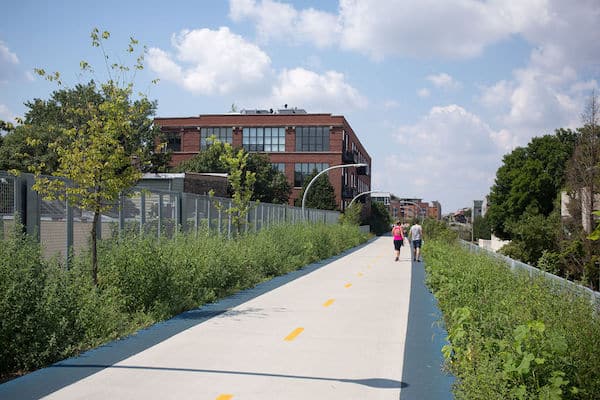 The 606 Trail is a brand new elevated urban trail built along a former rail line in Chicago’s west side. Opened in 2015, this is a wonderful urban greenway with separate pedestrian & bike paths, public art, and lovely landscaping. Also known as the Bloomingdale Trail, it runs 2.7 miles, from Walsh Park at the I-90, west to N. Ridgeway Ave. Modeled after The Highline in New York City, the 606 has sprouted a whole revitalization of the area, including cafes & restaurants. An out and back along the trail is 5.4 miles.

A sort of ‘greenway’ has also been built along N. Humboldt Blvd. heading north, for 1.3 miles through Palmer Square to the Logan Square subway station.

This 18-mile trail is one of the most spectacular urban runs in the country. Gorgeous views of... more...