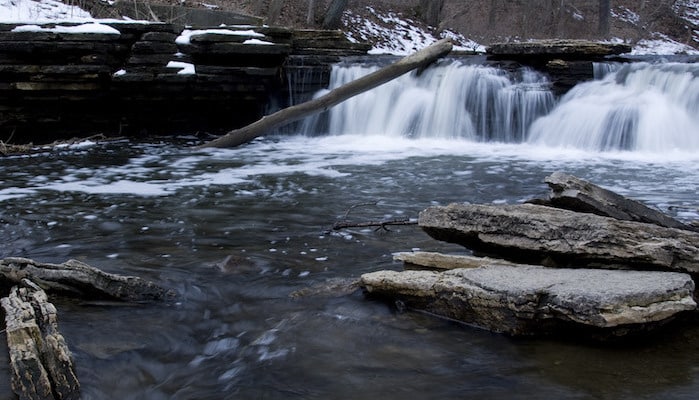 Get your fix of nature right in the Chicago suburbs with these Forest Preserve properties. These beautiful green spaces throughout DuPage, Cook, Kane, Will, and Lake counties are popular for running. Many have lengthy loops on paved or crushed stone paths, with opportunities to extend your run on nearby multi use paths. There are too many preserves to list them all here, but these are some of our favorites for running. See our overview map for a helpful guide by area.

Waterfall Glen: Located in Darien, just southwest of Chicago, Waterfall Glen is the crown jewel of Illinois Forest Preserves. This hilly 2,503 acre property is known for its great views from the Rocky Glen Waterfall to the Sawmill Creek Bluff overlook. It also boasts 11 miles of crushed limestone and grass trails. The main loop around the park is 9.5 miles. MAP

Skokie Lagoons: Paddlers and fishers flock to Skokie Lagoons to explore the vast network of pools and channels north of Chicago in Winnetka, but running is also popular on the 7.5 miles of trails here. 5.9 miles of those paths are asphalt, so even pavement pounders can escape into nature. A loop around the perimeter is 4.4 miles, with the option to extend your route south on the North Branch Trail. MAP

Harms Woods: North of Chicago in Glenview, Harms Woods is a 250-acre park divided by the Chicago River, and a favorite spot for outdoor exercise. Runners can enjoy this preserve’s numerous wildflowers on a 1-mile section of the North Branch Trail (which extends north and south outside the preserve) or take on the unpaved trails east of the river (Note: these can be quite muddy in the springtime).  MAP. North Branch Trail MAP

Schiller Woods: This bustling preserve to the northwest of downtown is actually within the Chicago city limits, and is incredibly popular for its proximity to O’Hare International Airport and the Des Plaines River Trail. It mostly consists of picnic areas and playing fields, but runners will find access to myriad paths along the river here, with the option to extend or loop your route onto the Des Plaines River Trail. Make your own route or participate in one of Universal Sole’s Fun Runs or trail races. Schiller Woods INFO Busse Woods: The Ned Brown Preserve, better known as Busse Woods, is conveniently located at the intersection of I-90 and I-290 in Elk Grove. While there are plenty of running options on the 10.8 miles of trail here, the go-to choice is the 8 mile paved loop around the lakeshore. For long runs, tack on more mileage on the Salt Creek Trail to the southeast. MAP Salt Creek Trail MAP

Poplar Creek: In Elgin, west and just north of Chicago, the Poplar Creek Forest Preserve has various options for running through nice scenery and modest hills. The 8.9 mile paved loop through the eastern end of the preserve is popular, or combine the unpaved yellow and brown trails for a 6.3 mile loop. MAP

Paul Douglas Preserve: This massive Forest Preserve in Hoffman Estates is all open grasslands, wetlands, and resident birds, with a 7.5 mile paved trail looping through it. This bike path is not as popular as some of the other, busier trails, so it’s a good choice for those seeking solitude. Paul Douglas Preserve INFO Deer Grove: The first of the Forest Preserves, is located in Palatine, about 40 miles northwest of the city. The park is divided into the primarily wooded Deer Grove West, and the wetlands and prairies of Deer Grove East, divided by Quentin Road. The most popular running route is the 5.2 mile paved circuit around Deer Grove East, although trail runners may enjoy a 5.4 mile unpaved loop around the west side of the park. MAP

Springbrook Prairie: The grasslands of Springbrook Prairie, southwest of Chicago in Naperville, are a top-notch birding habitat. The 5.5 mile crushed limestone Springbrook Prairie Regional Trail is a National Recreation Trail that circles the park, offering up great views of brooks, meadows, and if you’re lucky — rare avian species. MAP

Green Valley: With spectacular views of the Chicago skyline and 12 miles of trails through savannah and oak woodlands, Green Valley is a another top choice for a run near Naperville, southwest of the city. The Main Trail is a 2.7 mile crushed limestone path. We recommend adding on the 1.8 miles Hawk Trail to the scenic overlook for some hill work and killer views. MAP