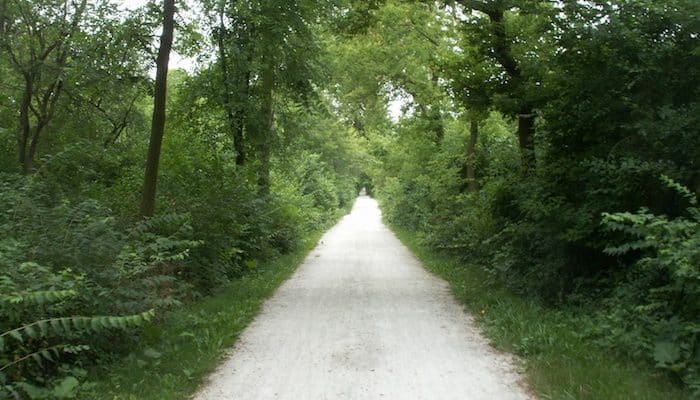 The Chicago area was once an important hub for railways. While many of those train lines are now a thing of the past, Illinois has preserved the legacy of the routes with an extensive network of multi-use paths. We’ve picked out the top paths for running — beloved by locals for their proximity to residential suburbs. Many of the paths also connect the numerous Forest Preserves, which present opportunities for loops and extensions. To see which of these trails are close to where you are, see our overview map. For a full list of Illinois Bike Paths, see this map. Des Plaines River Trail: This north to south multi-use path runs along its namesake river for over 56 miles, and connects several Forest Preserves in Cook and Lake Counties. Runners can create an out and back of any length along the trail, but the local favorite area to start is Schiller Woods, near Rosemont and O’Hare International Airport. Cook County MAP  Lake County MAP

Green Bay Trail: The 9 mile (one-way) Green Bay Trail is a major running destination for those located in the North Shore suburbs. It spans from Wilmette to Highland Park parallel to the Metra North Line and the Lake Michigan Shore. Hop on anywhere near Kenilworth, Winnetka, Highland Park, or Lake Bluff. The section near Lincoln Square is particularly nice. The route is mostly asphalt and crushed limestone, though it does utilize sidewalk at a few transitional locations. MAP

Illinois Prairie Path: One of the first rails-to-trails paths in the U.S., the Illinois Prairie Path is a 61 mile combo of asphalt, concrete, and crushed limestone. Unlike traditional north to south or east to west trails, the IPP has three major branches (and two spurs), which meet near the center of Wheaton. Heading west, it runs to Forest Park. North, it reaches to Elgin, and south to Aurora. The latter two sections meet with the Fox River Trail. MAP

Great Western Trail: 12 miles of the eastern Great Western Trail fall in the Chicago suburbs of DuPage County, forming a crushed limestone corridor from Wheaton to Elmhurst. 17 more miles stretch west of that. In DuPage County, the trail connects easily with the Illinois Prairie Path and the Salt Creek Trail. All sections are great for running, but the eastern end near Elmhurst has that quintessential suburb feel of nice homes and greenery. MAP I&M Canal Trail: Part of the Grand Illinois Trail, this 70+ mile path follows the former towpath of the Illinois and Michigan Canal. Some sections are gravel, while others are crushed limestone. Runners can access the path anywhere along the canal, but the most popular point close to the suburbs is Rock Run Preserve. MAP

Salt Creek Trail: At nearly 25 miles, the Salt Creek Trail in an important north to south trail which links numerous forest preserves from Busse Forest in Elk Grove to the Brookfield Zoo. The best section for running is heading north from Elmhurst, where the trail stretches along the river banks through Eldridge Park. MAP Thorn Creek Trail: South of Chicago, the Thorn Creek Trail stretches 12 miles from Glenwood through Chicago Heights, forming a runnable corridor between Forest Preserves. This section is part of the Grand Illinois Trail, and connects to other multi use paths in the north and south. MAP

Tinley Creek Trail: The 18-mile asphalt Tinley Creek Trail, like many other Chicagoland multi-use paths, is a useful connector between several Forest Preserves. Because the trail is currently divided into two segments, most runners tend toward the northern section of the trail, with access in Oak Forest. MAP

Erie Lackawanna Trail: In Indiana, the Erie Lackawanna Trail traces the Chicago suburbs between Calumet City/Hammond and Crown Point. It’s almost 17 miles of asphalt, beginning in Crown Point near a historic site where bank robber John Dillinger escaped arrest. The north end stops just shy of the Illinois border. There are plenty of interesting trails to connect to along the way. ROUTE MAP