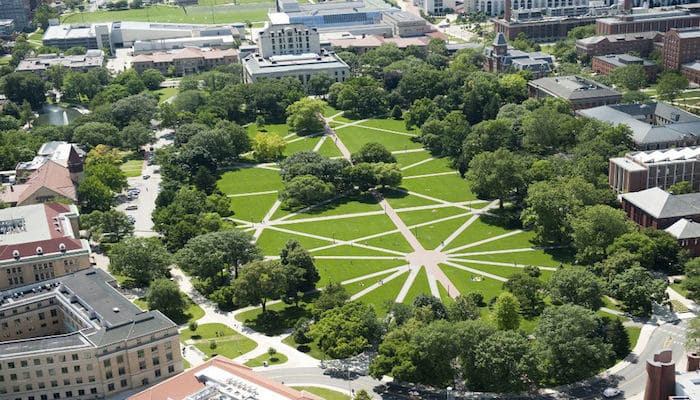 Located 3 miles north of downtown Columbus, OSU is the third largest university campus in the United States. It is a very nice campus for running. There are wide pathways going by the red brick buildings of the 1700 acre campus, and wide streets with generous sidewalks. One can easily put together a several mile run within the campus. The highlight is the central part of the campus. It’s about 1 mile from the northern end of the central part of the campus at Lane Ave. south to 10th St. or so, and about 1 mile between High St. to the east and the river to the west. A jaunt around The Oval’s large green space, with the gorgeous Italianate Renaissance Revival style Thompson Library at the west end, and then the Southern Oval, is about 1.5 miles.  Add 1/2 mile around Lincoln Tower Park, to the west of The Oval. Other noteworthy buildings are Ohio UnionHale Hall, the Kuhn Honors House, Browning Amphitheatre (a traditional stone Greek theatre) and Mirror Lake. At the northwestern end, Knowlton Hall, the Fisher College of Business and Hitchcock Hall, next to the stadium at the corner of West Woodruff Avenue and Tuttle Park Place, are worth a look.

For even a few more miles, jump on the Olentangy River Trail, which runs south to downtown and north for several miles. Just to the west of the freeway, it’s about 1 mile around the perimeter paths of Fred Beekman Park. Just to the northeast of campus, there pleasant, leafy streets of the University District and Old North Columbus (east of High St., and between 12st St. to the south and E. Hudson St. to the north).

A very popular route among runners in Columbus. The trail runs east-west along the Scioto River, serving... more...

One of the most popular bike paths in all of Ohio, the Olentangy Trail is located just... more...