No Thanks
Dalmatian Coast, Croatia 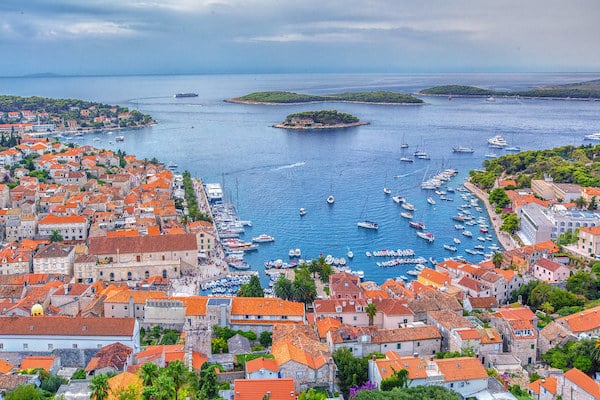 Hvar is one of the more visited islands on the Dalmatian Coast, easily accessible via ferry from Split and known for its picturesque beaches, scenic coves, vineyards & forests. There’s some wonderful running on Hvar. We’ve mapped three delightful seafront routes in Hvar, Stari Grad, & Vrboska. There’s also some pleasant running on the quiet roads in the interior, passing farms & vineyards.

Hvar Waterfront. 4.7 km one-way, 38m gain. There’s nearly 5 km of pleasant running along a paved seafront promenade in the port and resort town of Hvar. From the center of town, follow the Šetalište Tonija Petrića for 2 km north to FALKO Beach, or the Šetalište put Križa south for 2.7 km to Pokonji dol Beach. There are great water views along this dedicated waterfront path. At Pokonji dol Beach, you can continue further south on a gravel, more rugged path.  Note: Beach not very runnable.

Stari Grad Waterfront. 4.6 km one-way, 60m gain. Run along the water in one of the oldest towns in Europe! Overall, one can run for 4.6 km along the water, with views to the long, protected bay. From the center of town, take the paved Obala hrvatskih branitelja seafront path for 1.7 km north to Plaža Helios, and south for 3 km to Maslinica Beach (which is also a large public bath), which is 1 km past the ferry terminal.

Vrboska Waterfront. In Vrboska, a fishing town founded in the 15th century, we’ve mapped two great running options that can be combined.

One of the most scenic waterfront runs on the Dalmatian Coast! Includes a loop of Park-šuma Komrčar,... more...

Some of the most scenic and varied running options along the Dalmatian coast. We've mapped ~18 km... more...