No Thanks
Denver, CO: Suburbs 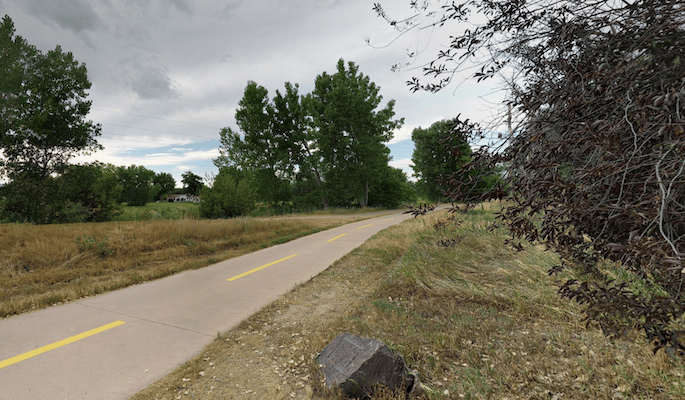 In Littleton, just south of Englewood and Lakewood, the best bets for running are a series of trails and greenways. The anchor is the Mary Carter Greenway. At its south end, there some good multi-use paths and trails in the Chatfield State Park/Reservoir area.

Mary Carter Greenway. This paved multi-use path runs for 7.3 miles from Englewood south to Chatfield State Park, mainly along the South Platte River. It’s a pleasant run, with some water views and connecting other trails and parks along the way. For the first 4 miles to Bowles Grove Park, there are paths on both sides of the river. South of Reynolds Landing (5 mile mark), the area becomes less suburban, passing a series of lakes and reservoirs, ending at Chatfield State Park, where there are other paths and trails.

Chatfield State Park. This is a popular park for its water activities on the Chatfield Reservoir, plus wonderful running opportunities on its 26 miles of trails (10 miles paved, 16 miles non-paved). The trails range from easy multi-use paths to more moderate trail running. It’s a really nice mix of park, paths along the Reservoir, and some hillier terrain, with views of the foothills and the Platte River valley. Scenic easier options include the 2.7 mile Dam Trail and the 3.2 mile Equestrian Trail. A good challenge is the 10-mile Perimeter Loop. TRAIL MAP

Add-Ons: The northern end of the park connects to the Mary Carter Greenway, which heads north for 7.3 miles to Littleton & Englewood.

Hildebrand Ranch Park. There’s wide open trail running in this park west of Chatfield State Park, with terrain ranging from plains to hogback. The best bet for running is the Two Brands Trail, a 5-mile loop with gentle grades. TRAIL MAP. There are some additional trails at the Chatfield Farms section of the Denver Botanical Gardens.

Some great options within 20 miles of Denver: The Mount Falcon Trail in Morrison; Waterton Canyon and... more...