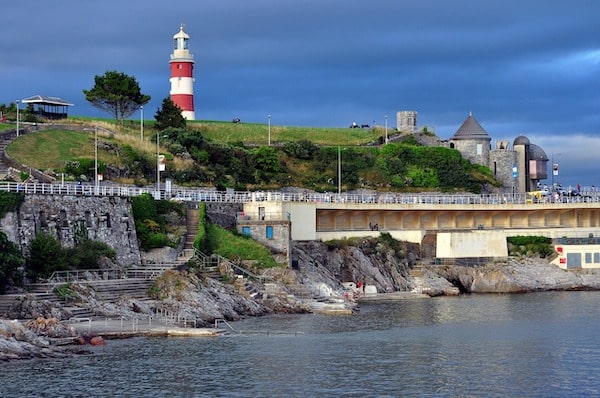 Our guide to running in Plymouth includes two routes, which can be combined: a ‘runseeing’ tour and of the main sites, marina, and Hoe Park, and an exploration of western Plymouth’s marina and parks, The largest city in Devon, Plymouth is known for its maritime heritage, Barbican district, and the Mayflower Steps, where the Pilgrim Fathers set sail for the New World in 1620.

Our ‘runseeing’ tour consists of three sections. Use our map as a guideline or follow your own route. A good place to start is near the railway station, and run through the Greenery, the main thoroughfare heading toward the water. Turn LEFT, heading east on Royal Parade to explore the marina (~1.,5 miles), where the Fisherman’s Walk around the Aquarium connects the marina’s east and west side and the Mayflower Steps. Then use Lambhay Hill to connect to Hoe Park. There are ~2 miles of paths around this famed cliffside green space featuring Smeaton’s Tower, a statue of Sir Francis Drake, war memorials, and the wide Hoe Promenade. The final section is the waterfront path along Hoe Rd. (Plymouth Foreshore), with nice views to Plymouth Sound, with the Lion’s Den and cliffs in the background.

Add-On/Longer Route: See our route in West Plymouth, which you can connect to using the marina paths west of Hoe Park.

A true destination run and one of the most scenic in Cornwall. Landscaped gardens, open parkland woodland... more...