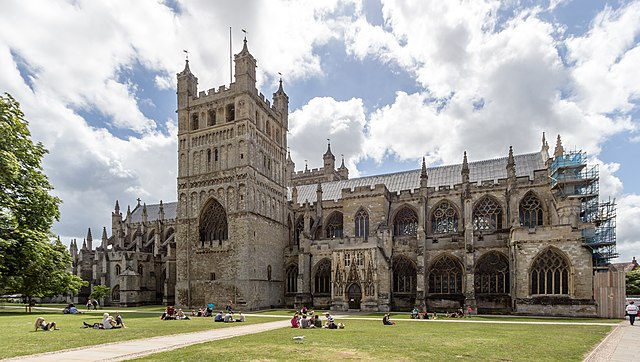 This ‘runseeing’ tour of the ancient Roman city of Exeter hits all the major sites, and includes several small parks, and a section of paths on the River Exe. For longer, there’s good running in Exeter along the River Exe headed south toward Topsham.

Start at the Medieval Exe Bridge, and run through the mainly pedestrianized urban commercial area along Fore St. to the medieval Gothic Exeter Cathedral. Explore the grounds, and then use Gandy St. to head up to the area around the Exeter Castle, Guildhall,  and Royal Albert Memorial Museum. Continue north on Queen St. to the lovely, small Bury Meadow Park, which is adjacent to Exeter College. Then cut diagonally, heading southwest toward the River crossing the B3183 & St. David’s Hill. Use Bonhay Rd. briefly to access the River Exe Path. The final 2 miles of the run is on the various paths along the River Exe. From Flowerpots Park, head south on the west bank of the river, crossing to the east bank at Trews Weir Memorial Park, and then return north along the Quay paths to the start.

Add-On: Continue sough on River Exe paths for up to 4 miles to Tophsam. And in Topsham, there’s another 2.5 miles of paths along the Exeter Ship Canal.

There are some pleasant paths along the River Exe, which flows south into the English Channel. One... more...