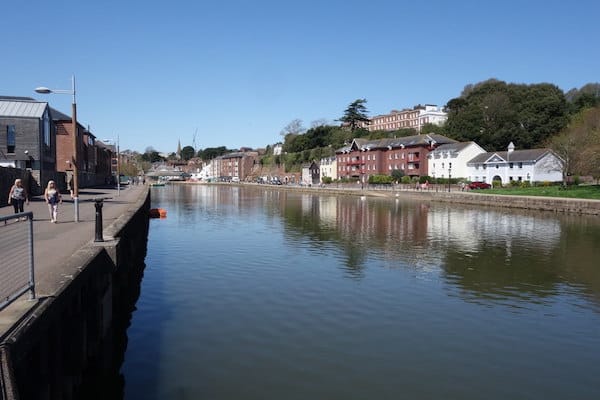 There are some pleasant paths along the River Exe, which flows south into the English Channel at Exmouth. One can run up to 8.2 miles, including 2.5 miles along the Exeter Ship Canal in Topsham. Fun option: do the longer run one-way and return via train!

The best stretch is the 5.7 mile stretch that runs between Exeter and Topsham on a combination of paved and gravel paths. The northern end starts in the ancient Roman city of Exeter. There are paths from the Skywalker BMX Track headed south, on both banks of the river. Head through central Exeter. It’s 2.5 miles south to Riverside Valley Park (good crossover options), 3.5 miles to River Exe County Park, and then another 2 miles to Topsham.

In Topsham, there are 2.5 miles of additional paths along the Exeter Ship Canal.