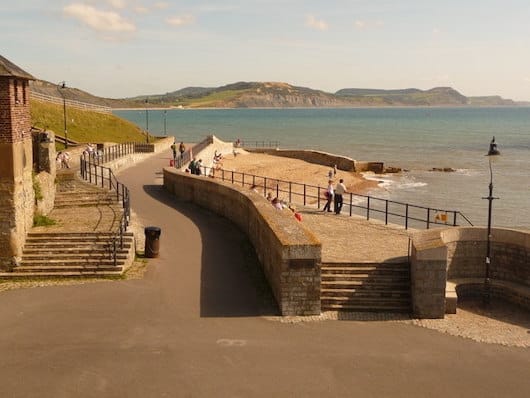 There’s some nice running in Lyme Regis, the so-called ‘Pearl of Dorset’ at the Dorset-Devon border. The best place to run in Lyme Regis along the Marine Parade, a paved waterfront promenade which goes for 1 mile between Lyme Regis Beach and the Marine Aquarium (the section around the Aquarium is the Cobb Lower Walkway). There are great views of Lyme Bay the whole way.

For more, and some variety, you can also include the series of paths around the grassy areas and the Langmoor and Lister gardens on the hill just above the waterfront path. This can add another 1-2 miles.

South West Coast Path. The section of South West Coast Path between Lyme Regis and Axmouth is considered one of the highlights of the Jurassic Coast. It’s a challenging trail run over uneven terrain, and due to the clay soils sections of the path can be muddy and slippery after wet weather.

Fantastic running options in this coastal town, including a waterfront promenade along the sweeping harbour, paths around... more...

This is a guide to running in Devon, a county in South West England. The coverage includes... more...