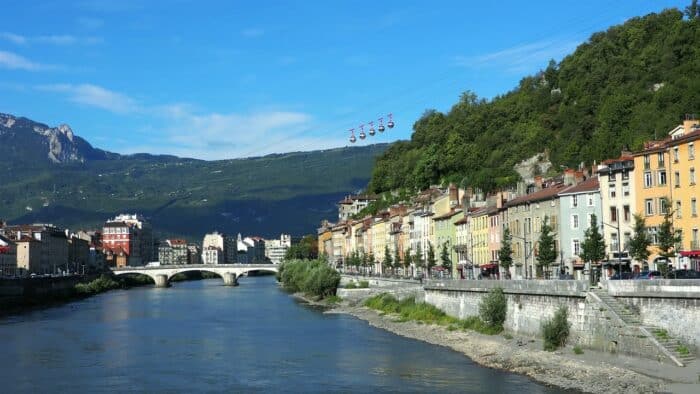 There are extensive multi-use paths along the Isère and Drac rivers in Grenoble. The rivers form a Y-shape in the valley. They’re a great opportunity for a long, flat run. The terrain varies from river views to more wooded sections. To your left, there often are great views of the Vercors, with Neuron Peak looming over the town. This route is for the Isère River Paths. See our separate route for the Drac river path (Chemin de la Digue). These two can be combined in various ways.

One can run for many km along the Isère River. We’ve mapped two sections, starting centrally at Jardin de Ville. In some sections the paths are below grade right along the river, and in others they run above the river.

West Section: From Jardin de Ville, we’ve mapped an 8 km one-way route heading west to Saint-Egrève. The first 3 km are on the southern side. Cross over to the north side at the 2.5 km point at a pedestrian bridge. The path continues on the north side, paralleling the N481. At the 4.5 km mark, you can connect to the Drac River paths, but it’s a bit of a highway tangle.

Add-Ons: Run the paths in Parc des berges de l’Isère, or around the university campus.

The signature river path in Grenoble is the Isère, but there's also some nice running along the... more...