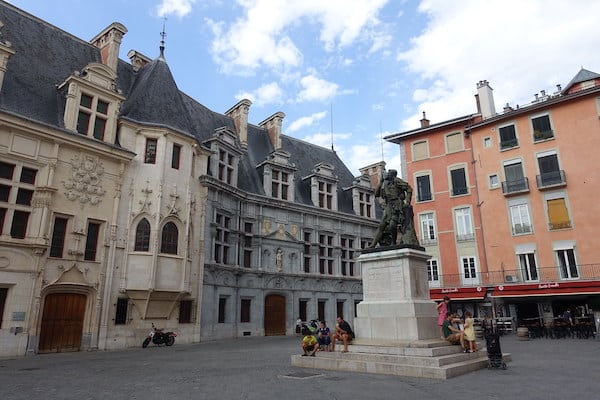 This is an easy-to-follow 7.5 km ‘runseeing’ tour of the central, historic part of Grenoble, featuring Paul Mistral Park, several other small parks, and some of the city’s key sights. We’ve also mapped a 2.5 km one-way route through the main parks: Paul Mistral, Berge de L’Isère, and Green Island.

Start at Jardin de Ville, near the river and the Tourism Office. Head away from the river and run through the charming Place Victor Hugo and Place St. Martin along the tree-lined D5 to the pretty Hoche Garden, which has paths and water features. Then, tun LEFT, heading east on the wide Boulevard Maréchal Joffre (D1090), which has a nice pedestrian median, to Grenoble City Hall and the park in front of the Muséum de Grenoble (Natural History Museum).

The next section is a tour of several small, attractive parks. Start with Paul Mistral Park, Grenoble’s main park, featuring nice paths for running, numerous sports facilities, and a commemoration of the 1968 Winter Olympics. A loop is ~2 km. Continue on the path on the south side of the Stadium into the Parc des berges de l’Isère, and toward the river through Green Island (Ille Verte) Park. The final 1 km is through the historic section of Grenoble, using Place Notre Dame and them RIGHT on Rue Bocherie, passing the Musée de Grenoble, Cathédrale Notre-Dame, and impressive Palace of the Parliament.

Add-Ons: Some additional paths in the parks, paths along the Isère river, or wind your way on the streets of Grenoble’s historic section