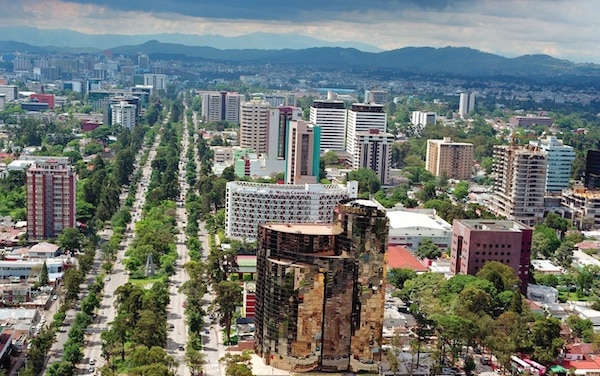 Of our two main routes through the central part of Guatemala City, this route is focused on the section headed south from the Centro Civico along Avenida La Reforma & Parque Las Americas. It’s up to 6.5 km one-way, and can be combined with our northern route through the historical centre.

Start at the Tourist Office in the Centro Civico. You might be able to sneak into the Estadio for a couple of laps around the running track. Head south along 10A Avenida for 1.5 km, which turns into Avenida La Reforma at the small Botanical Garden. Continue south along La Reforma, a wide, grand avenue with lots of space for running! Pass the Zona Vica hotel district, Plaza de la Republica, Torre del Reformador (steel tower), numerous apartment buildings, sculptures, and art displays. It’s 2.5 along La Reforma to the Plaza Obelisco (Obelisk Square), which is a major intersection point of the city.

From Plaza Obelisco, continue south along the Avenida Las Americas, which has a pleasant green linear park/bike along its middle. This section is 2.5 km, ending at the Juan Pablo II Monument. It also passes just to the east of the La Aurora (Guatemala City) International Airport.

Shorter Options: Since this would be a 12k out and back, you can shorten the route by focusing on the Av. La Reforma or Parque Las Americas sections.

Longer Options: Combine with our northern section from Centro Civico through the Historic Centre to the Relief Map. This can be a combined route of 20 km!