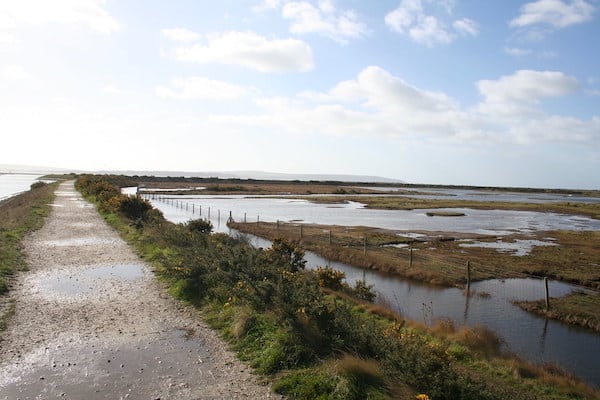 This is a gorgeous run in Milford-On-Sea, a village on the Hampshire coast known for Hurst Castle & Keyhaven Marshes. Starting at the beach near the car park, there’s a paved promenade that then turns to gravel, running east along the English Channel for 2.5 miles to Hurst Castle, which lies at the end of a dramatic spit. Explore the paths around this large fortress. Retrace your steps for 1 mile to Kinger’s Rocks at Saltgrass Ln.  Here, you can return to the start or explore the marshes.

Keyhaven Marshes. This is an exploration of the paths around the Keyhaven Marshes, a lovely area of wetlands with flat gravel paths making for nice running. A loop of the Marshes is ~4 miles. Then you can return to Milford-On-Sea on the waterfront path.

Add-Ons. At Milford-On-Sea, a gravel waterfront path extends for 3 miles west from our start point.

Share:
Essentials
Route Map: Weston Waterfront (Out and Back)

Fantastic running options in this 71, 000 acre park, known for its heathland, forest trails, and quiet... more...

The signature run in Southampton is a tour of its gorgeous parks, including Palmerston Park and the... more...