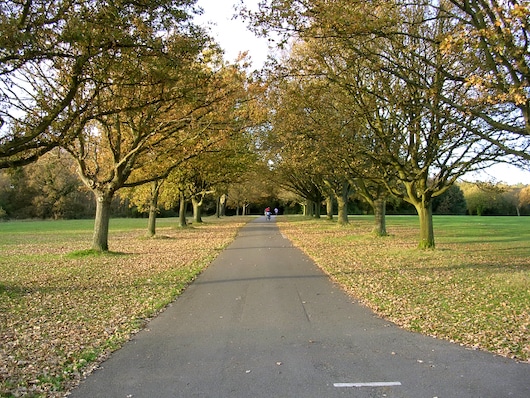 Southampton is a major port city, and also the location of a ferry that goes to Isle of Wight. Our preferred run in Southampton is to combine several parks, notably the large Southampton Common and Palmerston Park. See also our separate route for the Weston Waterfront.

Parks & Common Tour. We’ve mapped a one-way route through several parks, starting at Queen’s Park at the waterfront. Do a quick loop, then use Queensway or High St. north to Palmerston Park. Nice paths, and a loop of that park is 1.5 miles. Continue north, along ‘The Avenue’ to Southampton Common, a huge public park with extensive paths. A loop around the perimeter is 2.5 miles. Our 3.5 mile one-way map can be used as a guideline to create your own route.

Itchen Valley Park. This 440-acre park located in northeast Southampton beside the River Itchen is a lovely running destination. There are several miles of paths through woodland and meadows. Highlights include the 2-mile Water Meadows Trail, the 2.5 Mile Woods & Meadows Trail, and a 1.5 mile Cycle Path (some overlapping).   TRAIL GUIDE

Weston Waterfront. A dedicated waterfront promenade runs along the River Itchen for 1.6 miles to the picturesque Netley Abbey. There are great water views, and the circa 1239 Abbey is worth a visit.  Add-On: at the Abbey end of the trail, there are some lovely trails for running in the Westwood Nature Reserve.

A lovely run in Weston, on the east side of the Solent from Southampton. Includes a 'butterfly... more...