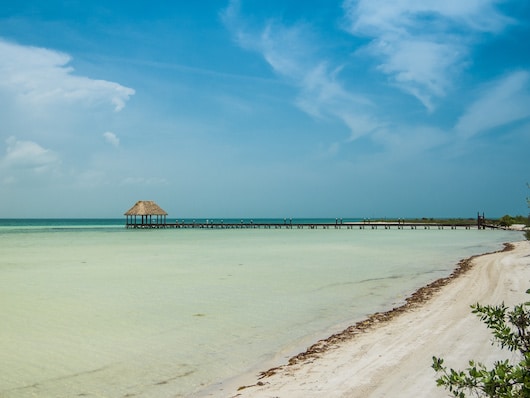 Holbox is an island located on the north coast of the Yucatán Peninsula, popular as a visitor destination for its beautiful beaches. The nearly car-free island is accessible via a 20-minute ferry ride from Chiquilá, which is a 2-hour drive from Cancún. The ‘roads’ on Holbox are primarily dirt/sand pedestrian paths.

The route, inspired by friend of Great Runs Aurélie Vilmer, combines a sand path along the water with some sections of beach. The surface of the sand path is usually fairly firm, but can get soft. The beach itself is OK for running. There are varying widths, and the surface is fairly firm, but it can be pebbly.  From the center of town, run along the main road/pedestrian path, Av. Joaquin Coldwell/C.Cherna for 3 km toward Playa Punta Cocos at the end of the island, and then running back for ~4 km along the beach/waterfront path to Playa Holbox. Return to town via the beach or Av. Damero.

In central Cancun, the best options for running are: the bike path that extends towardd the hotel... more...

This resort island 12 miles east off the east coast of the Yucatán Peninsula is FABULOUS for... more...