No Thanks
Lisbon, Portugal 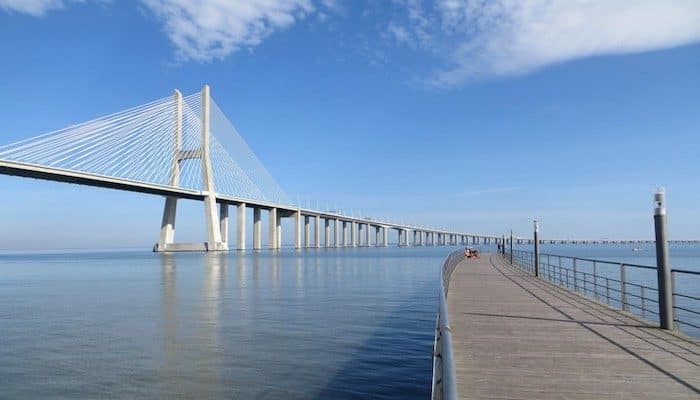 This is a great waterside running spot in the eastern part of Lisbon. The 11 km out and back along the Tejo River starts at the Marina and runs through Parque das Nações (Park of Nations), site of Expo 98 and since transformed into the striking ultra modern side of traditional Lisbon. There’s an Oceanarium, a cable car along the water, a large shopping center, a discovery museum, Lisbon’s casino and a host of other attractions with a water theme. It’s also a popular area for nightlife. The flat route has great views, with some spectacular path sections that nearly float on the water. A highlight is the run under the Vasco da Gama Bridge, which opened in 1998 and at 17 km is the longest bridge in Europe.

Starting at the Pavilhão do Conhecimento (Pavillion of Knowledge), do a short loop around the marina path that juts out onto the water, before heading east on the path. Head east through the Parque das Nações , the Oceanarium, and the Jardim do Passeio dos Heróis, following the gondola line (!) before going under the bridge. Just after the bridge, enjoy the paths of the Parque das Trejo, where you can run on the water or along a more shaded, park-like section.  There are places to sit and enjoy the view, restaurants, cafes, and other recreational activities along most of the way. The last little section turns curls left along the river toward the A30.