No Thanks
Little Rock, AR 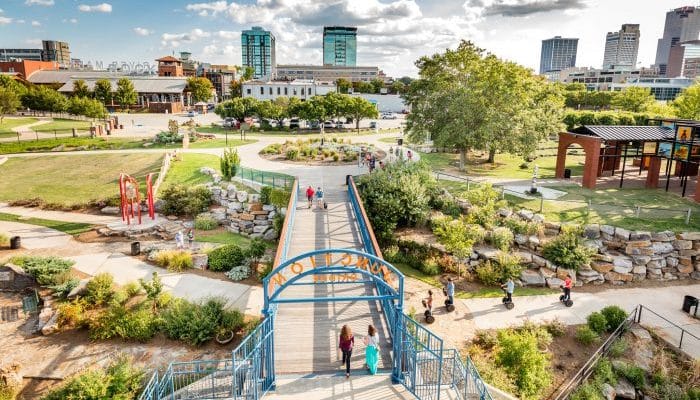 The Arkansas River Trail is the signature running spot in Little Rock. The flat, paved pathway is a car-free multi-use trail for 34 miles from the Clinton Presidential Park Bridge to Pinnacle Mountain State Park. The path can be quite busy and hot through downtown Little Rock, but it’s one of the better options for a long run in the city. This trail map has good information on scenic highlights and segment distances.

In central Little Rock, there are sections on both sides of the river, though the north bank features more of a dedicated path, with consistent water views. Some of the favorite locations to start out include the banks and bridges of River Market, the huge swath of parkland including Emerald, Rebsamen, Burns, Murray, and Campbell Lake parks, the peninsula of Two Rivers Park, and of course the picturesque 4,226 foot long Big Dam Bridge. Two Rivers Park Route.

Note: The section between the Broadway Bridge and Rebsamen Park is currently routed onto signed sidewalks and a the bike path along Riverfront Drive.

Use the Big Dam Bridge or any of the River Market area bridges to form a loop on the north and south banks. The most noteworthy loop covers the original 15.6 miles of trail, starting from the Clinton Library, heading west on the south bank trail, crossing the river at Big Dam Bridge, and returning east on the north shore before crossing back on the Clinton Bridge. MAP. Runners can shave off a couple of miles by beginning and ending near the Broadway Bridge. For a shorter run, runners can complete a 2.7 mile loop between the Clinton Bridge and the Broadway Bridge. MAP. Jaunts around the Clinton Presidential Park and the Clark Wetlands can add on about a mile.

On the south shore, it’s about 1 mile from the Clinton Bridge to the Broadway Bridge (where the trail joins the street), 2 miles to where the dedicated trail resumes at Cantrell Road and Dillard Parkway, 3 miles to the bike lane on Riverfront Drive, 4.3 miles to Rebsamen Park, 5.8 miles to Murray Park, 7.3 miles to Big Dam Bridge, 8.9 to the River Mountain/Two Rivers Park Bridge, 10.8 miles to Two Rivers Park Road, 13 miles to Maumelle Park, and about 17 miles to Pinnacle Mountain State Park.

On the north bank, it’s about 1 mile from the Clinton Bridge to the Broadway Bridge, 2.5 miles to Riverview Park, 3.5 miles to Big Rock Quarry Park, 4.5 miles to Burns Park, 6.5 miles to Campbell Lake Park, and 7.5 miles to the Big Dam Bridge.

Two Rivers Park is located along the west end of the Arkansas River Trail, but it’s a... more...

This large park in the Hillcrest/Riverdale area has both paved and dirt trails looping through its grounds.... more...