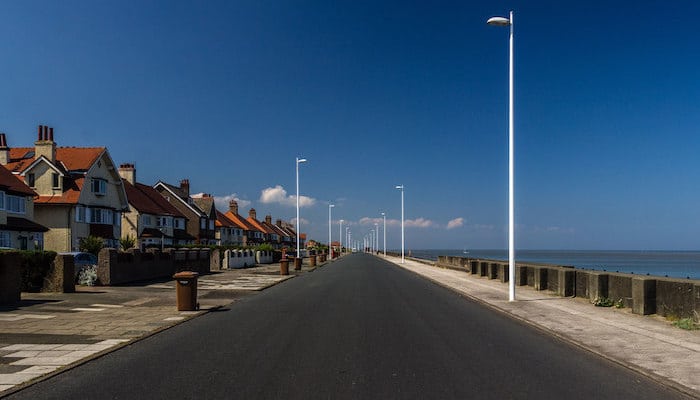 The Wirral Peninsula is the rectangular spit of land located due west of Liverpool, between the River Mersey and River Dee. It’s part of the Liverpool City Region, and most of the runs here are just a short commute from the Liverpool city center. Together, these routes make up the “Wirral Circular Trail,” a 35 mile circuit around the peninsula. It’s possible to run the whole circuit, but we’ve picked out some of the best sections below.

Magazines Promenade: This paved, 5 km waterfront walkway begins just on the other side of the Kingsway Tunnel. From the Seacomb Ferry terminal, it heads north for ~4 km to Marine Lake, then bends west around the waterfront for an additional 1 km. ROUTE MAP.

Meols Parade/Red Rocks: Meols, on the northwest coast of the peninsula, has another great promenade for running. The path begins in the east near Meols Beach and continues along the water for 2.5 km. At Kings Gap, turn LEFT, then turn RIGHT on Stanley Road, which will take you 1.5 km to Red Rocks beach. For more mileage, runners can continue south along the grass and dirt paths to West Kirby Beach, or east from Meols Beach toward Leasowe. ROUTE MAP.

Marine Lake Loop:  West Kirby Beach is the start of the Marine Lake Loop, a 2.5 km circuit around the Kirby Waterfront. The South Parade promenade is a classic waterfront path, but the asphalt paved jetty around Marine Lake is an interesting course with water on both sides. Pairs well with a jaunt on the Wirral Way. ROUTE MAP.

Wirral Way: The Wirral Way (Wirral Circular Path) is a gravel path spanning 20 km across an old railroad track that once formed a circuit around the peninsula. The north end can be picked up just off A540 near Ashton Park in West Kirby. The path then heads south along the coast, through Neston, and back inland (east) to the Hooton Train Station. ROUTE MAP.