The Best Places to Run in Basel 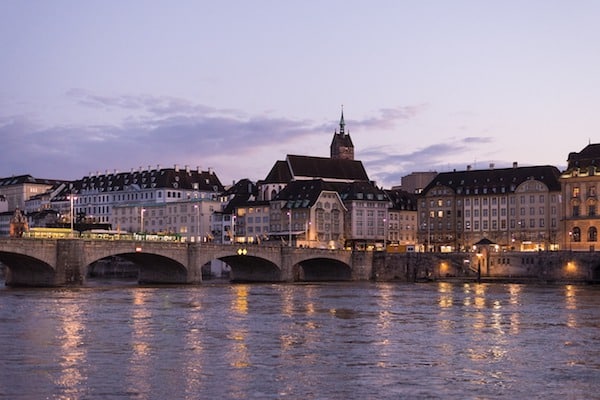 Basel is the third largest city in Switzerland and a major economic center. It’s situated on the Rhine River where Switzerland, France, and Germany meet. The ‘older’ sections of the city are divided into the more significant Grossbasel (Greater Basel) on the south side of the Rhine and the Kleinbasel (Lesser Basel) on the north side. As a fairly industrial city with lots of corporate HQ, the best running in Basel centers on river paths and sections of the old city. Just outside the city, there are good trail running options and roads through farmland.

The best place to run in Basel is the path along the Rhine River, especially on the south side. There’s also a nice path along the Wiese River, on the German border. We’ve also mapped a route through Basel Old Town, through some of the city’s parks, and a gentle trail run in the Allschwilerwald area.

As one would imagine, there’s extensive transport in Basel, consisting of buses and trams inside the city and trains leading to many points outside.

Some of our favorite runs in Basel, Switzerland

The path along the Rhine River is the signature run in Basel. The favored loop is from... more... 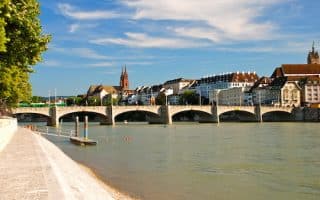 Along the Water | Historic / Tourist | Iconic | Classic River Paths
The path along the Rhine River is the signature run in Basel. The favored loop is from Basel's main bridge, the Mittlere Rheinbrücke, to the Birsfelden Hydroelectric dam -- a total of 7 km. Great views of the river, Old Town, and several sites.
Explore

Along the Water | Multi-Use Trails
A pleasant path follows the Wiese River, in the Kleinbasel section of the city (east side of the Rhine). The terrain is a combination of gently wooded path, with some views to fields and the small river. Option to run on the German side of the river as well.
Explore 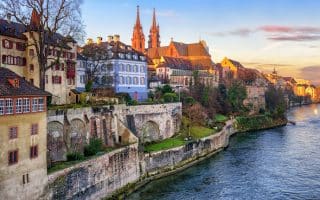 Historic / Tourist | Runseeing
This is a 'runseeing' tour of Basel's pretty and well-preserved Old Town, comprised of two sections: Altstadt Grossbasel on the south side of the Rhine and Altstadt Kleinbasel on the north side. Create your own run, or use our mapped 7.5 km route.
Explore

Hilly | Trail Running | Arboretum/Botanical Garden
A route incorporating Merian Gärten and the Wandertafel. The park is a botanical gardens, and then a series of interconnected walking/hiking trails east of the A18 through woods and fields. Fairly hilly in the Wandertafel.
Explore 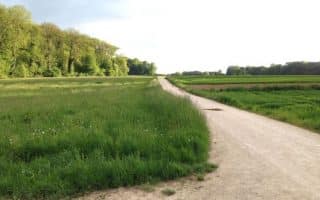 Hilly | Trail Running
This is a fairly gentle trail run from the village of Neuweilerstrasse to Neuwiller, through woods and fields, with some small hills. Combination of road and path. Easily reachable by tram, just 10 minutes from central Basel. Terrain is rolling hills.
Explore

Along the Water | Historic / Tourist | Iconic | Classic River Paths
The path along the Rhine River is the signature run in Basel. The favored loop is from Basel's main bridge, the Mittlere Rheinbrücke, to the Birsfelden Hydroelectric dam -- a total of 7 km. Great views of the river, Old Town, and several sites.
Explore

Basel has a temperate climate, with mild to warm summers and cool winters. In summer, average high temperatures are in the 25-26C (high 70s) range, with cool-ish nights. In winter, nighttime temps dip below freezing, but rise to about 5C (40F) during the day. There can be ice and occasional snow — bring appropriate clothing. It can be rainy and cloudy in Basel, with only 30% sunshine in some months. There’s more rain in summer, owing to downpours.

Andy’s Sportlade is a great independent store in Basel to buy running and other outdoor sports gear.

Sport XX is a popular chain of outdoor sports stores in Switzerland, with several locations in Basel.