The Best Places to Run in Mendoza City, Capital of Mendoza Province

The city of Mendoza, capital of the province of Mendoza, is Argentina’s fourth largest metropolitan area. It lies in a region of foothills and high plains, on the eastern side of the Andes. It’s popular as an olive oil and wine growing region, and also as a gateway to hiking, horse riding, and other recreation activities. Our guide to running in Mendoza is focused on the central part of the city. To the west, the terrain gets mountainous, and to the east is vast network of mainly agricultural roads.

A good way to get oriented is our Central Mendoza ‘runseeing‘ tour, which showcases the wide boulevards and squares anchored by Plaza Independencia. Just west of there is Parque General San Martín, one of the best places to run in Mendoza. For a challenge, combine with the Cerro de la Gloria and other trails nearby. The best bet for a longer off-road run is the Ciclovia Godoy Cruz, a paved multi-use path that heads into the southern part of the city.

Runners should note that Mendoza has great weather year-round, with plentiful sunshine. Summers are hot and humid, while winters are mild and dry.

Some of our favorite runs in Mendoza, Argentina 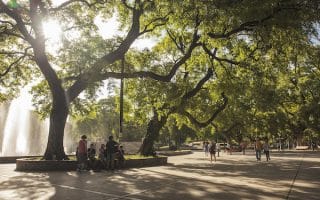 Iconic | Parks | Iconic Parks
The iconic running spot in Mendoza. The expansive urban park features a lake, a rose garden & tree-lined promenades lined with statues. The popular lake loop is ~2.5 km, and the other roads have paths alongside. Add with Cerro de Gloria.
Explore 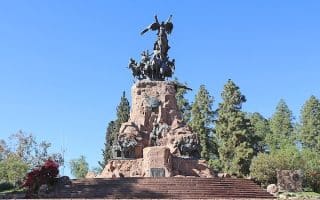 Great Views | Hilly | Trail Running
Just west of Parque General San Martín, those who like hills will be rewarded with the run up the Cerro de la Gloria. A 100m climb over 1 km, with great views. Other trails for running just south of there.
Explore

Multi-Use Trails
Not the most scenic, but one of the best opportunities for a longer off-road run in Mendoza. The paved multi-use path starts downtown and heads south for up to 6.3 km into the Godoy Cruz area, terminating near Parque Benegas.
Explore

Iconic | Parks | Iconic Parks
The iconic running spot in Mendoza. The expansive urban park features a lake, a rose garden & tree-lined promenades lined with statues. The popular lake loop is ~2.5 km, and the other roads have paths alongside. Add with Cerro de Gloria.
Explore

There a large choice of accommodations in the central part of the city, which is the best area to stay from a running perspective. Downtown hotels will provide access to our Runseeing, Parque General San Martín, and Ciclovia Godoy Cruz routes.

Mendoza is a gateway to outdoor recreation activities, and there’s a large number of outdoor sporting goods stores, where running gear can be found.

Running event calendar for the area.

The Mendoza Marathon, held in April, is the signature annual race in Mendoza.